I picked up an obscure '60s underground paper from LA called 'Open City' and as often there were some curious surprises in there, such as the only review of the ACID SYMPHONY 3-LP set that I've ever seen. Some other interesting reviews, check it out. In addition there was a long and respectful discussion of Corman's "The Trip", an interview with the US Kaleidoscope, a syndicated interview with the Doors, a review of the Airplane at the Hollywood Bowl, and an instalment in Charles Bukowski's "Dirty Old Man" series of short stories that would ultimately be assembled for his debut book. But this was as early as '67 and the Buk a complete unknown. Cool paper, odd that I haven't run across it earlier. 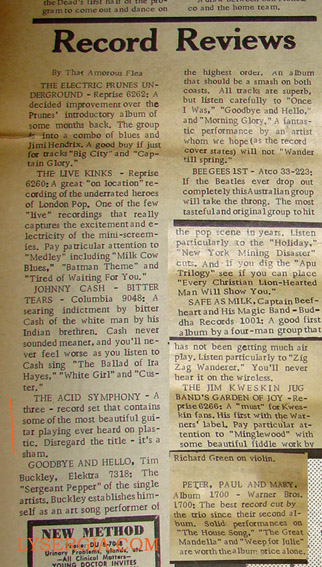