You are not logged in. Log in
Entries by Topic
All topics  «
Misc.
Poker
Politics
Religion
Television

Essential Reading
Stability, America's enemy
7 Signs of Non-Competitive States
Inequality and risk
It's the demography, stupid.
Islam can vote, if we let it.


Take a look at the speaking notes of Caroline Flint's 'Papers for Cabinet Meeting': 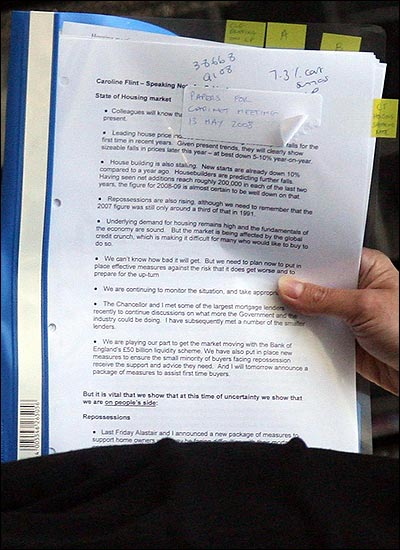 The media have focused on two parts: paragraphs two (...falls in price later this year - at best down 5-10% year-on-year) and six ("We can't know how bad it will get.") But other parts deserve as much attention for what they reveal about the average Labour politician's level of understanding of economics and the overall way in which they think.

"Underlying demand for housing remains high and the fundamentals of the economy are sound. But the market is being affected by the global credit crunch, which is making it difficult for many who would like to buy to do so."

It's breathtaking that drivel like this can be uttered in a cabinet meeting. In Economics, 'Demand' means demand backed up by the ability to pay. I'd like to have a Lambourghini but I can't pay for one. It doesn't matter how much I want it, I can't have it. So in economic terms I have no "demand". Now that banks and building societies are no longer giving 100 per cent mortgages and are instead expecting a deposit of anywhere between 10 and 25 per cent, the level of demand had dropped dramatically. Twenty-five per cent of a £300,000 house is £75,000. How many people have that much free cash in their current accounts? Demand is not high.

And then there's the mention of the 'global' credit crunch. This is yet another attempt to present the problem as something totally external to the UK. Of course Britain is not immune to things that happen overseas, but it's naive to suggest that there isn't something wrong here too. There are plenty of British 'sub-prime' borrowers who've borrowed far more than they can afford.

Then there's paragraph four: 'Repossessions are also rising, although we need to remember that the 2007 figure was still only around a third of that in 1991.'

Why on earth is this the relevant comparison? The credit crunch didn't really kick off until the second half of last year. The Northern Rock run was in the second half of September! The housing bubble of the 1980s peaked in August 1988, so a fairer comparison would be with a point earlier than 1991. If the ratio quoted is 1 to 3 now, I think that's an indication of much worse to come.

Paragraphs six to nine are clearly written by with immense faith in the ability of governments to influence events and spare the suffering of the overstretched. There is talk of 'measures' and help for first time buyers. Please God No! Have they learned nothing?

And then there's the part in bold near the bottom: "But it is vital that we show that at this time of uncertainty we show [sic] that we are on people's side."

It really does say 'we show' twice. It's a very revealing typo. It's all about show with New Labour. And in case there's any doubt, Labour has to show that it's on 'people's side'. Well that's a relief. I thought they were on the side of the insects. But sarcasm aside, WHICH people's side are they one? Well from the tone of the note, they are on the side of those who are overextended in the property market - those who've taken on huge debts. I don't recall the government ever caring about people who stayed out of the market because they didn't want to take on unsupportable mortgages. They don't appear to care about future homeowners, just existing ones. So if we follow the logic here, they would favour measures to benefit buy-to-let gamblers (sorry ... investors) at the expense of non-owners who'd like to see a fall in prices.

It's pathetic that cabinets ministers are being briefed by someone with less than a sixth-former's understanding of economics.


Just one quick fiddly point. I think comparing someone's demand for a Lamborghini with someone's demand for a house is erroneous. One is effectively essential and the other is for bald men with small penises. Yes you can rent, but a desire to move from the rented sector (where you are at the whim of your landlord and can not make you dwelling your “own” with personalised work) is not really on a level with wanting to trade your Polo in for a sportcar. Don’t really agree or disagree with the points your making, but I think your analogy is clearly a false one. A roof over your head is not the same as a £200k sports car.