Using a Visual Model to Understand the MOQ

Over the course of the past several months, I have been attempting to put what is known as Robert M. Pirsig's MOQ, the Metaphysics of Quality, into a visual model for the purpose of a learning tool to better understand what Pirsig is describing.

The basic tenent of the MOQ is a division of reality into 2 parts, the first called static quality. This contains all that we are aware of in the universe. The other part is called Dynamic Quality, which we are not capable of perceiving other than by its passing. Static quality is then broken down into four parts, or layers, often represented in a 'ladder' type of diagram.

My hope is to represent the MOQ in a different way, a way that is as different from a 'ladder' type of diagram as the MOQ is different from the subject/object metaphysics (SOM) that we use in everyday life to desribe our reality. It will be represented as five tetrahedrons within tetrahedrons, although the visual image I use here will be spherical in nature. I do have a tetrahedron model in the Links at the bottom of this page, available for viewing now.

Each tetrahedron could be said to represent the boundaries, or the Moral Conflicts, between the four discretely static levels, those discribed by Pirsig as chaotic-inorganic, inorganic-biological, biological- social, social-intellect, and static-Dynamic. One question that is asked here, is the actual 'boundaries' definable? Or is there an inherent fuzziness?

This method may take some getting used to. It entails thinking in 3 dimensions rather than in 2, and is therefore more expansive. Rather than saying there is a progressively expanding number of layers, or steps, or ladders, coming from 'somewhere' and going to 'somewhere', necessitating an inherent open-endedness, we will construct our model with the notion of its being a closed system. There is no part of reality we cannot account for using it, including the Dynamic Quality which has also been called the Conceptual Unknown. I developed this model as an offshoot of my studies of Buckminster Fuller's Synergetics Volumns 1 & 2 many years ago. Fuller noticed that there must be a minimum of 4 points for an object to exist in 3 dimensional reality. He then postulated the tetrahedron as the smallest object capable of being represented geometrically. We can represent this by saying the following:

Point 2 in space- a line, with length, no width, depth

Point 3 in space- a triangle, with lenth, width, no depth

Point 4 in space- a tetrahedron, with length, width, depth

Therefore, in constructing a model, I chose to use a tetrahedron as the basic building block. For the sake of making things simpler however, I will only represent the tetrahedron as a circle, which I am assuming I can do for these reasons:

1) A circle and a triangle both contain 180 degrees. The 180 degrees is fairly obvious in the triangle, but the circle sometimes masquerades as containing 360 degrees, mostly due to our association of circles with the globe of the earth in dealing with maps, I think. If we think of a circle as a line in space which has been overlapped at its ends, we can then take the circle apart and it becomes a line again. We are allowed to do this because no two points can occupy the same space at the same time, and so although the lines of the circle may appear to connect, they in fact only overlap. Once the line is identified, then the 180 degreeness of the circle becomes apparent.

2) A tetrahedron contains 720 degrees, while a sphere contains 360 degrees. This does make a world of difference in the mathematics, but as my web art skills are not up to the task of constructing what I have in mind, I will substitute spheres for tetrahedrons in the visual for now, with the understanding they represent tetrahedrons in real space.

One thing to keep in mind is this, however...that two triangles form a tetrahedron. Each triangle contains 180 degrees, and it would be expected the sum of those triangles would equal 360 degrees. Where do the other two triangles in the tetrahedron come from? This is perhaps a Dynamic representation of Quality and its synergetic capabilities in the static universe.

I will ask the reader to make certain imaginative associations between the circles I depict, and tetrahedrons that they are meant to represent.

With this in mind, we will proceed to build our model... 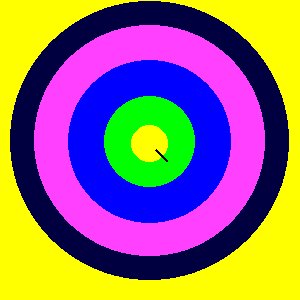 I will ask the reader to make allowances for my lack of artistic experience. I realize the model itself may look like a bullseye, but please understand it is the idea being represented here that is of primary importance, and not the graphic artwork. Still, I will attempt to improve my skills and in time, will be able to represent the MOQ Wimple Model in a more expansive way.

We will note first, that the model itself is composed of two parts, namely the static quality of Pirsig's MOQ, represented by four layers, these represented by the colors green, blue, indigo and violet, and the yellow part of the model in the center, and containing the four layers as well. This yellowness represents Dynamic Quality and is of primary importance to the understanding of the MOQ.

Dynamic Quality is "not this, not that," but to get a conception of "it" we might think of Dynamic Quality as being the paper on which the model is written. But Dynamic Quality doesn't stop at the edge of the paper... rather it extends into the world and indeed throughout the entire universe.

We will note next that there is a line which forms a Q in the center of the model. This line is representing precessional Dynamic Quality and how it interacts with the static quality layers. This line allows us to introduce Time into our model. We will say that in a precessionary universe, Time can only move outwards, or forwards, and never in reverse. We will also be able to see the way in which each layer of the MOQ interacts with each successively outward layer.

We can see that each layer contains a discreteness, while at the same time allowing Dynamic Quality to pass through as long as that DQ is operating in a most optimal fashion, or a precessional fashion. If a 'backward' motion occurs, there is discord within the model until that motion is corrected. Also, if the DQ passing through is a causal factor in the disruption of any lower layers, no succeeding layers will be able to operate optimumly until the proper precessional momentum is restored to the system.

I came by the name Wimple by attempting to illustrate the way in which Dynamic Quality interacts with static quality. As the DQ 'flows' through the four layers of the wimple model, it is the enabling factor which brings rise to our reality. When the DQ reaches the outer intellect layer, it is not lost to infinity, but rather it 'wimples' back to the center of the model via a method termed Quantum Entanglement.

Wimple means a fold or a crease, and I chose the word to distinguish my model from Robert M. Pirsig's own version of the MOQ. This work is entirely my own and Mr. Pirsig does not endorse it in any way, yet it is my aim to represent the MOQ as outlined in Pirsig's book Lila in the most accurately dynamic way possible while still being static enough to be of value as a learning tool.

I welcome all comments and suggestions and please remember, this is a work in progress and will be a long time in construction. Please feel free to explore the links below, which I have been attempting to organize in a more expansive manner, but still they need much work.

NOTE: PLEASE USE YOUR BACK BUTTON TO RETURN TO THIS "WIMPLE" HOMEPAGE. HOMEPAGE LINKS ON OTHER PAGES IS INCORRECT.