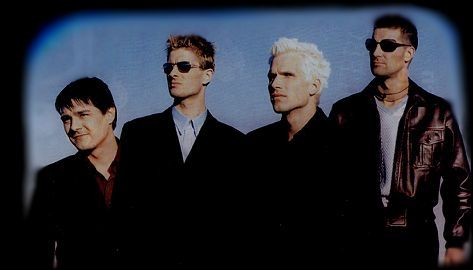 Welcome to another unofficial Michael Learns To Rock page. Michael Learns To Rock is one of Denmarks most succesfull bands ever. The group was formed in spring 1988, and allready same year they won two music contests and met their current manager, J.P. Andersen. The next year they got recording contract with the Danish recording company, Medley Records and released their first single - The Actor.

In 1991 their first album, Michael Learns To Rock was released. It sold about 30,000 copies in just two months and was number 1 on the sales list for 5 weeks.

In 1993 they released their 2nd album - Colours, which sold more than 1.1 million copies and became one of the best selling Danish pop-albums ever.

In 1995 Played On Pepper was released, and it became a mega-succes too. The album sold about 100.000 copies in half a year, and the readers of the two Danish music magazines Mix and Vi Unge chose MLTR as danish band of the year 1995 and That's Why as danish single of the year.

In 1996 Paint My Love - Greatest Hits was released in Asia and sold more than 2.5 millions copies. MLTR are REALLY BIG in Asia, and with their 4th album "Nothing To Lose", they are hoping to break through in Europe too. And why not? In Denmark "Nothing To Lose" sold 25,000 copies on the release day!

Come get to know a little about the members of MLTR.