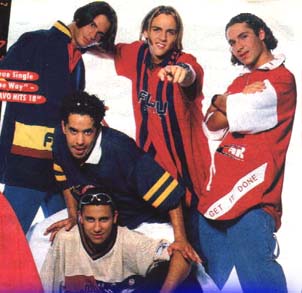 The Boyz
This is the FIRST "The Boyz" page! It was made in autumn 97 when searching on the net I never found other pages about this great group and I thought I had to build one and this is the result! This page is here for THE BOYZ and for all their FANS who want some infos, pics or who long to meet other fans around the world. I hope you enjoy your staying here!

First I have to make clear that this is an UNOFFICIAL page and that I don't know the boys (unfortunately).All the information and the pics are taken from German magazines such as Bravo and Popcorn.

This is just a little site dedicated to The Boyz because they are great musicians and singers and I thought it was a shame that they didn't have a page on the net ( If they had and I didn't find, please forgive me)

Now something about them: They started in November 1996 when they called themselves for "Five Attack" now they have changed their name to "The Boyz" and I personally think that it sounds much better.

The lads not only sing but also play several instruments: Salvatore that still attends school and that then wants to study languages plays the sax in a great way in fact he has already played in big bands. Stephane plays the piano and the drums. Flow is the "dj" of the band.

Before joining "The Boyz" T-Soul sang R.Kelly's song in the "Berliner Clubs". Kane, old friend of T-Soul used to be a great rapper in Berlin.

Even though all the boyz are very busy with their music carrier Flow finds the time to study at university and it doesn't seem as he wants to leave his studies. Great boy!

"The Boyz" have realised 4 singles:"Round 'n round", "Let me show you the way" , "One minute" and "The shame". Their first album is out now and its name is "Boyz in da house" Now they have realised a NEW single "I like it" and it's part of the new album that will be in the stores really soon. The Boyz have been working on this new CD all the summer! I guess that it's even better than the first one!

All The Boyz have changed their look now, for example Flow has cut his wonderful blond hair!

That was all for now, I hope you enjoyed the page! If you have any comments, corrections, more infos about "The Boyz" or whatever you can e-mail me at rosafiorito@yahoo.com or leave me a message in my guestbook.

* other sources say that he's born in Italy 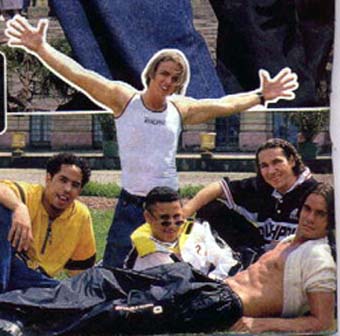 PICTURES GALLERIES: with new pics
DRAWINGS:NEW
The Boyz messageboard: Meet other The Boyz fans, leave messages, ask questions, answer to questions
The Boyz chat:
An interview with The Boyz:
LINKS:
Back to the main page where you can also find my guestbook and leave me a mess!:
MY page for the Swedish group BLOND:
My figure skating page: With photos of the best skaters
IL PATTINO:
My graphics: