The Death Of Brian 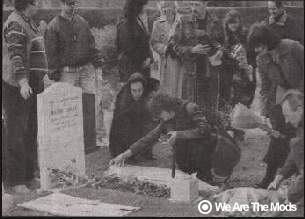 Brian Jones died on 3 July 1969. He was found floating in his swimming pool at his home, Cotchford Farm, Sussex.

The coroner recorded a verdict of death by misadventure, taking into account the amount of drink and drugs in his system, but there are many questions to be asked surrounding the exact circumstances of Brian's last moments.

The many theories of murder mostly revolve around the many people who were at Brian's home that night, and whose police statements all clash and contradict one another. These theories carry a lot of weight and there seems to be too much proof to be just rumours. To find out more about the murder of Brian, look out for the books: 'Golden Stone-The Untold Life And Death Of Brian Jones' by Laura Jackson or 'Paint It Black-The Murder Of Brian Jones' by Geoffrey Giuliano, then make up your own mind.

As a tribute to Brian, only two days after his death, the pre-planned free concert at Hyde Park in London by his former band the Rolling Stones went ahead. As Mick took the microphone, he asked for silence, then went on to read from Shelley's 'Adonais':

Peace, peace! he is not dead, he doth not sleep-
He hath awakened from the dream of life-
'Tis we, who, lost in the stormy visions keep
With phantoms an unprofitable strife,
And in mad trance strike with our spirit's knife
Invulnerable nothings.-We decay
Like corpses in a charnel; fear and grief
Convulse us and consume us day by day,
And cold hopes swarm like worms within our living clay.
The One remains, the many change and pass;
Heaven's light forever shines, Earth's shadows fly;
Life, like a dome of many coloured glass,
Stains the white radiance of Eternity,
Until Death tramples it to fragments.-Die,
If thou wouldst be with that which thou dost seek!
Follow where all is fled!-Rome's azure sky,
Flowers, ruins, statues, music, words are weak
The glory they transfuse with fitting words to speak.

Perhaps the saddest thing about Brian's death was the fact that he'd cleaned up his act and was ready to deliver his best music yet- he had given up drugs completely and was in the middle of starting his solo career; he had already demoed a first single, and had arranged auditions for his own group for the 4th of July.

The man they called the Golden Stone died with his creative potential unfulfilled but, unlike so many other casualties from his generation, he's not forgotten.