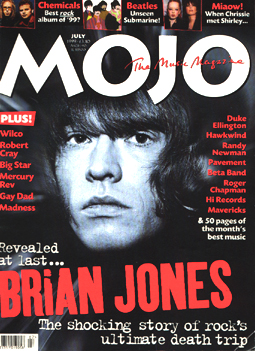 BRIAN JONES: How did the founder of The Rolling Stones manage to ruin himself so convincingly? At last, on the 30th anniversary of his death, Mick Jagger, Charlie Watts, Pete Townshend and many other friends and lovers speak out about the man who's been dubbed "the perfect pop star".

Chances are, regardless of the era or location you grew up in, there's a couple of types you've known at one time or another. Firstly, there's our resident Lothario - let's call him Vinnie - a little mad, bad and dangerous to know. The local tearaway. Vinnie's name often crops up in the same hushed breath as "back seat of a car", "knickers round her ankles", and "had to go away for a while until the heat died down".

Then there's this other guy. Let's call him Cedric. Bespectacled. Quiet. Nervy rather than nerdy. Disconcertingly distant, as if he's forever entertaining some private joke in your presence. Invited you round to his house one day and you wondered why he was so intent on playing you his dad's record collection, until it dawned on you that these obscure discs in their thick cardboard sleeves by black artists you'd never heard of weren't his dad's at all. They were his and he seemed to know every note, every nuance.

Brian Jones was both of these characters. And a few others besides. A complex and bewildering bunch of multiple personalities, a man who panhandled the Cheltenham Delta and then upped and left for London, where he conceived and founded the biggest rock'n'roll group of all time. A short guy with broad shoulders and a little Welsh-bull chest that tapered down to a skinny waist, a bum like two boiled eggs in a handkerchief, drainpipe legs and matching Achilles heels. How many contradictions can one frame take?

As a child he indulged in that most harmless of activities, bus-spotting. He also had a proclivity for staging car crashes with his Dinky toys and igniting them with lighter fuel. He carried those contradictions through adult life. A softly spoken, drinking, smoking, womanising Narcissus with a psychosomatic condition (asthma). A strutting, intense egotist with a gentle, shy smile that played across his face whenever the TV camera lingered long enough. A musical purist blessed, or cursed, with pop star looks. Eulogised by many. "Brian Jones, with his puffed-up Pisces, all-knowing suffering fish eyes. Brian always ahead of style. Perfect Brian," as Lou Reed put it in Fallen Knights And Fallen Ladies, his elegiac 1972 essay on rock deaths. Demonised by just as many. "He was always nice to me," says Charlie Watts, "but he was not very liked, Brian. Stew [Ian Stewart, off-stage Stones pianist] just couldn't stand him. Bill [Wyman] never got on with Brian. Not Bill's fault. Brian's fault entirely." And misunderstood and misrepresented, it seems, as often as he was maligned.

The whole 'Is it a boy or is it a girl?' thing starts with Brian Jones. He was the first heterosexual pop star to wear costume jewellery, off-stage and on. At the first of several drug-bust trials in 1967 he wore a navy blue Mod suit with bell-bottom trousers and flared jacket, large floppy blue-and-white spotted tie and Cuban-heeled shoes. As you do. "He was the definitive, quintessential pop star," says Nick Kent. "He looked as good as any of the women in the '60s like Verushka or Francoise Hardy or Nico. And he did it himself. He didn't get a bunch of designers. It wasn't 'Brian Jones dressed by…' It was self-presentation. That was his art."

And it all went so terribly wrong. In 1962 he had a head full of the blues and a heart full of hope. By 1967 he had a wardrobe full of Chelsea velvet and Marrakesh silk. But by the summer of 1969 the blues was merely a distant, fading bottleneck note, the dandy clothes were crumpled in unwashed, hashburned heaps, and Brian Jones floated face down in a swimming pool.

Brian was a bright kid. Nine O Levels. Two A Levels. Obvious university material. But, with a perverse intransigence that would become a hallmark of his short life, he took a series of menial jobs instead - everything from coalman to clerk - which exasperated his parents beyond endurance. It annoyed them even more when he was sacked from most of these dead-end occupations for petty pilfering. But the thieving didn't upset them half as much as when Brian kissed the girls and made them cry. And got one of them pregnant; she was 14. And then another; she was married. Then they packed him off to Europe, 'until the heat died down'.

"When I was 15 a bunch of us used to sneak into Sunday afternoon pictures at the Cheltenham Regal, when it was supposed to be adults only," says Pat Andrews, Brian's girlfriend from 1961 to 1963 and then mother-to-be of his third child Mark (whose other Christian name, Julian, he shares with all Brian's sons, in honour of one of his heroes, tenor saxophonist Julian 'Cannonball' Adderley). "One of the guys in our little group said he had a friend who'd been away for six weeks and had just come back from Germany and Scandinavia. He said he'd lost track with his friends and had no girlfriend and seemed a bit low." Pat agreed to meet Brian on a blind date in the Aztec coffee bar. "I don't know why they called it the Aztec," she laughs. "It had fishermen's nets and candles. But it did have a jukebox. I'd arranged to meet him in this alcove. I didn't want my friends seeing him in case he was frumpy and looked like Abbot And Costello. He had beautiful golden shiny hair which you could see in the darkness, but he was wearing this tweed suit which put me off. But when we talked he was so different from all the other Cheltenham boys. He wasn't after a quick grope. You could actually have a conversation with him."