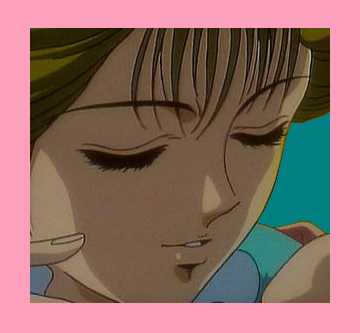 Shouka. Who is she? Well, that's kindof a long story, and I tell most of it in other spots, so this page is mostly (for now) just a description of her. Later it may turn into a mini-shrine, who knows;)

Shouka was the daughter of the local landlord of the village of Chouko. She had long, light-brown hair which she usually wore with two locks looped above her temples and bangs, and the rest of it loose down her back. Her eyes were blye, and she was quiet, reserved, well- behaved, all that a good dutiful daughter could be expected to be, until she was about twelve, when she ran into the son of the local carpentry-master, Myou Juan. It was love at first sight for both of them, although neither one realized the other had even "noticed" them that way. Both thought the other regarded tham simply as a friend, but such a friendship, even just as friendship, was frowned upon by her father, since to most of the villiage, Juan was simply a middle son of an admittedly skilled artisan, "Nothing special." her father always admonished her, "He barely even talks." Even so, he was her one rebellion, and Shouka always held Juan in her heart, and when the villagers discovered that young Juan was actually the Suzaku Shichiseishi Mitsukake, her father bacame more willing to look at allowing them to become closer friends.
(For more information on Juan and Shouka's love, read A Silent Courtship)

Beyond here be spoilers BEWARE!!


As for what we know of Shouka through Fushigi Yuugi, we know that by the time Mitsukake was 21, they were at least engaged, and probably also lovers (although that is subject to much speculation). It can certainly be said that they loved eachother deeply, and Shouka worked alongside Mitsukake, travelling to nearby villages with him and helping him as a nurse. She died about a year before Suzaku no Miko arrived on the scene. She caught a terrible illness while Mitsukake was away in a distant village, and although she tried to hang on until he got back, she died just before he was able to arrive and save her. Mitsukake went into deep mourning, refusing to tend to the needs of his body beyond the most basic of necessities for survival. He also refused to have anything to do with other people. Because of this, he never knew that in the village, Shouka was still alive, or so it seemed to everyone else. The disease which had seemed to kill her raged through the village, and to the villagers, Shouka was a miracle- worker, able to bring the dead back to life with a single touch of her lips. It was later discovered, though, that in fact, the disease had been spread by Shouka herself, after her dying body was posessed by the deamon which caused the disease. The only reason that the deamon had been able to invade her body was that, in a desperate dying wish to hold on just long enough to see her love again, Shouka had allowed the deamon the use of her flesh. In return, she would be able to see her darling Juan again. When she was finally brought to her senses by Miaka and realized what she had done, she begged Mitsukake to grant her release through his power, and was finally laid truly to rest, having seen her beloved one last time. 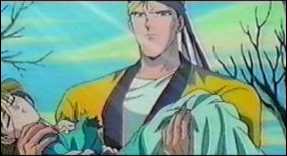