For some reason Karl XII på slagfältet, vol. 2 does not give a detailed list of Swedish losses in the battle of Narva 1700. At least some of shortcomings can be remedied by a document dated Narva 28 November 1700 and signed by Major General Maydell. The units covered are the participating detachments from the Finnish infantry regiments:

Schlippenbach began by pointing out the difficulties.The troops were poorly clothed and there was a shortage of provisions. Enemy attacks and illnesses were decimating the army and the horses had suffered badly. What to do?

The cavalry commanders Colonel Enesköld (Åbo and Björneborg) and Major Burghausen (Carelian) stated that their was hardly a man (or perhaps horse) fit for real duty in their regiments. Kaulbars (Schlippenbach's dragoons) supported them and said that only about 100 men in his regiment were fit for duty. To march towards the border would likely result in a battle and even if this was won the army would become so weakened that it could not possibly stop further incursions.

The infantry officers agreed. The situation was very bad and officers who had lost their horses and equipment to the enemy were incapable of replacing what had been lost.

The discussions continued the following day. Schlippenbach began by saying that reports from Pechory suggested that the Russians were preparing a massive invasion. What to do? It was decided to reinforce Dorpat, while the rest of the army should move away from Kirrumpäh and march back and forth as the supply situation allowed.


Among Schirren's papers in Riksarkivet there are two lists of travellers to and from Russia who passed the border post at Neuhausen (Vastseliina) during the period 1 January 1698 to 30 June 1699. Some examples:

10 January 1698: The wife of Colonel Blumbergh and her people & Lieutenant Johan Rickman.

30 May 1698: Lieutenant Johan Gordon and a servant from England to Moscow.

23 June 1698: The theology student Tobias Renner from Thuringia to Moscow.

7 July 1698: Johan Gordon, son of General Gordon, and his wife along with a captain and four servants from Scotland to Moscow.

Those travelling the other way were fewer in 1698, but one notable example:

21 October 1698: Guillaume Felle, a Doctor of Theology of the Franciscan Order from Persia to Mitau and France. (Felle was a noted traveller).


On 18 August 1701 Col. Wolmar Anton von Schlippenbach wrote to Charles XII from his camp at Kirrumpäh. The letter was accompanied by an order of battle:

Schlippenbach explained that is was unusual, but this was due to the fact that the Russians way of fighting was unorthodox. They preferred to attack flanks, so Schlippenbach had decided to place a few small detachments in a second line behind these.

The text below the drawing explains that each battalion and squadron in the first lane consisted of 100 men and the small detachments in the second line of 20 men each. Not all units were included as some of his own regiment and Brandt's dragoons were positioned at Marienburg and Major de Molin's dragoons near Peipus. 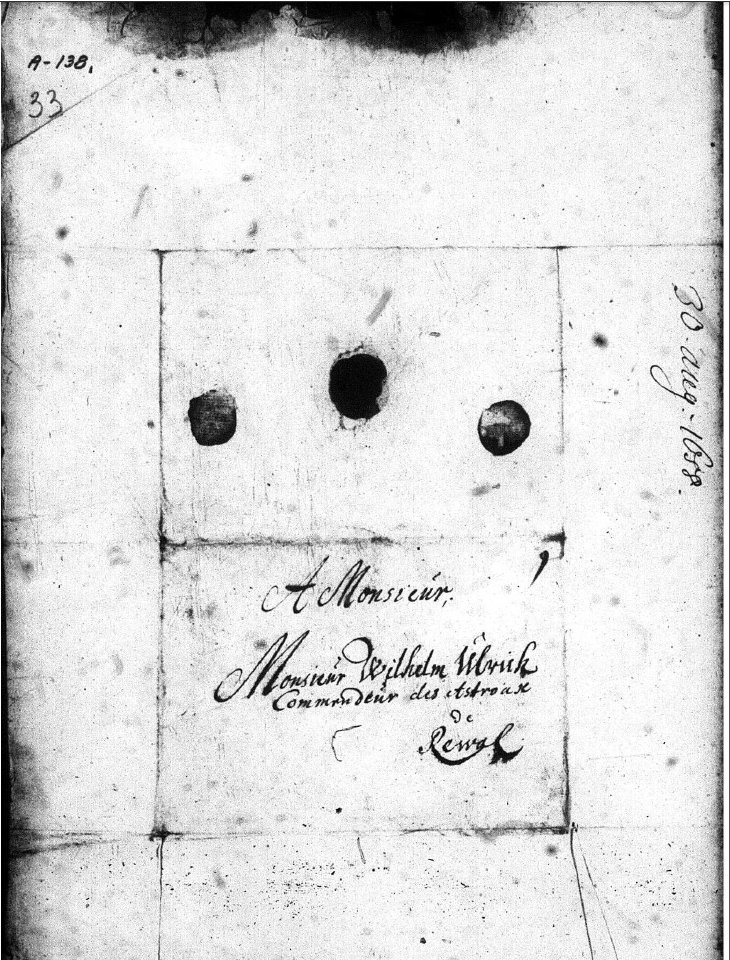 
Some weeks ago I photographed most of the original documents in Carl Schirren's collection in Riksarkivet (15 volumes). At this point I have managed to make inventories of vol. 3-6 and 9-11. The content of these volumes is fairly typical of Schirren, i.e. a focus on Patkul and the struggle of the Livonian nobility against Swedish absolutism as well as on the intrigues leading up to the formation of the big anti-Swedish coalition in the late 1690's. Schirren's keen interest in the latter issue seems to have resulted in him pracitically cleaning out the collection of  letters from the Swedish representatives in Poland to the Governor General in Riga. In the abovementioned volumes I have for examples found almost 30 letters from Georg Wachschlager and nearly 25 by Per Cuypercrona in Danzig (in the archive of the Livonian Governor General I have up til now only found two letters from Wachschlager).

Schirren also "took care" of some of the Russian correspondence (20 letters from Thomas Kniper in Moscow, 8 from Thomas Herbers in Pskov, 3 from Philip Vinhagen in Novgorod) as well as from Florian Thilo von Thilau at the borrder post of Neuhausen (Vastseliina). The collection also contains a few letters from the Swedish embassy to Moscow in 1699 as well as material pertaining to the Great Embassy and various other Swedish-Russian issues.

A couple of odd items (vol. 11) are copies of Steinau's and Paykul's explanations of the reasons behind the Saxon defeat at Düna in July 1701. The fomer's is dated Warsaw 20 September 1701 and numbers about 60 pages, while the latter is dated Berlin 14 July 1702.

Schirren's collection
Some weeks ago I photographed most of the original documents in Carl Schirren's collection in Riksarkivet (15 volumes). At this point I have managed to make inventories of vol. 3-6 and 9-11. The content of these volumes is fairly typical of Schirren, i.e. a focus on Patkul and the struggle of the Livonian nobility against Swedish absolutism as well as on the intrigues leading up to the formation of the big anti-Swedish coalition in the late 1690's. Schirren's keen interest in the latter issue seems to have resulted in him pracitically cleaning out the collection of  letters from the Swedish representatives in Poland to the Governor General in Riga. In the abovementioned volumes I have for examples found almost 30 letters from Georg Wachschlager and nearly 25 by Per Cuypercrona in Danzig.
Posted by bengt_nilsson at 9:40 PM MEST
Share This Post


On 19 January 1699 Governor General Dahlbergh ordered the Postal Director in Riga Gerdt Gröen to "subscribe" for various European newspapers which were needed by his office (LVVA, fond 7349, op. 1, vol. 51). The papers were specified in a separate attachment (not present). Among the Schirren papers in Riksarkivet (vol. 4)  there are a number of items pertaining to this issue, most notably an undated list which appears to be the one Dahlbergh's letter refers to:

A possibly more accurate list of the German publications was forwarded to Dahlbergh the following day. It had been put together in Hamburg by Polycarp Marci (1654-1724):


A couple of weeks ago I had the opportunity to visit a little known private archive which contains a significant number of items from the time of the Great Northern War. One of the more interesting ones is an undated proposal by the fortification officer Lorentz Christoffer Stobée (1676-1756) for the creation of an engineer regiment. It is from the content possible to conclude that it must be from the final years of Charles XII's reign, i.e. after his return to Sweden in late 1715.

In the proposal Stobée outlines his plan. The regiment should consist of 1,500 men and be used during sieges, landings and transports. The personnel would also be adept at building all sorts of bridges, ships, barges and rafts. However, the regiment could also be used as a standard infantry regiment if the circumstances called for this. So how would the necessary manpower be found in a situation where it was difficult to muster enough men for the existing regiments? Well, Stobée had an idea: there was in Sweden a large number of jobs which were filled by men, but could just as well be handled by women:

Stobée suggested that it would be entirely sufficient to leave one or two male experts in each town and these could then start factories manned by women, which would produce everything needed.

Another unnecessary occupation for men was the making of saltpetre. It was simple enough and could be learned by anyone. By leaving some old and infirm saltpetre-makers as teachers it would be possible to mobilize another 3-4,000 men for the army.

Stobées engineer regiment would be divided in three battalions, each battalion made up by four companies of 125 men. To each company would be added about 20-30 craftsmen (carpenters, blacksmiths, bricklayers etc.). Each company would also have its own baggage train with all necessary equipment. If the King accepted the proposal, Stobée stated, the regiment would be ready in four months. To make serving in the regiment more appealing to officers Stobée suggested that it should take precedence over both the artillery and the fortification - engineering being a science which contained parts of many other sciences.


On the 30 September 1708 the eight Russians captured at Koporye two days earlier were interrogated. A short summary of the result:

The first one said he was a corporal in Col. Hupowitz regiment of Cossacks, 1,000 men strong. However, only 400 were present at Koporye and they had arrived from Pechory eight days earlier. They were not the only ones to arrive, a detachment of dragoons under the command of Lt. Col. Stepanov (6 companies of about 100 men each) had also come from Pechory. These detachments were at Koporye under the command of Brigadier Frazer, who had six regiments at his disposal. There was a garrison of 700 in Koporye itself, but these had not taken part in the battle.

The next two prisoners belonged to the Tobolsk dragoon regiment. They had deserted from their unit, which was under the command of Lt. Col. "Wasili Czatzeoff". The regiment consisted of six companies. They had arrived from Livonia about six weeks earlier. There were 700 men in the garrison at Koporye.  When the Swedes had attacked there were six Russian regiments.

The last five prisoners were from Monastyrev's dragoons (2), Manstein's dragoons (2) and "Pladur's" battalion (1). According to them there hade been five dragoon regiments and one Cossack regiment at Koporye. There were six Lt. Colonels and six Majors. The regiments were:

(It should be emphasized that this is a summary of the testimonies given by these prisoners - or rather how the Swedish interrogators interpreted their remarks).