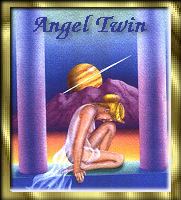 Angel Twin's Castles In The Sky

Hello my name is Teri, welcome to my page. Yes, as the name implies I am a twin. My sister and I were both on Prodigy and when looking for a NN I settled on the name Angel Twin which of course by default left my sister with the NN Devil Twin. I live in Jacksonville, FL, home of the Jacksonville Jaguars football team, with my son, Timmy. More about me later.

As I continue to expand this site you will find that it deals with mythological creatures, far away lands and Castles in the Sky. I have been intrigued by stories of winged horses and all powerful gods for some time. I will be sharing some of my favorite myths with you here. Other stories will be linked to this one from other pages so check back often until you find one of your favorites. At the bottom of my page is a directory, by clicking on the word MAGIC you can find a description of the other pages. Hopefully this will save you time so that you don't visit pages you have no interest in.

Eros And Psyche - A Love Story
Long ago in distant lands there was a king who had three daughters, and the youngest, named Psyche, was so beautiful that Aphrodite grew jealous. So she called upon her son, Eros, to aide her in her mischief. Look down upon the castles below she told him, in a bower there, a maiden lies sleeping. Go pierce her with an arrow so that she will form a passion for the first person she sees as she awakens. I will supply her with someone of my choosing to awaken to. So Eros, being a good and obediant son, flew down to the castle. He made himself invisible and flew through the window into the girl's chamber. As he stood looking at her he thought her beauty unsurpassed. He leaned over to pierce her with an arrow, making a noise, so that as she awoke suddenly, she looked into his eyes. And Eros, so captivated by her beauty, let the dart slip and scratch his own hand. He felt the sweet poison spread into his veins and he grew dizzy with the joy. He had often spread love, but never felt it, shot others, but never been wounded himself. As he stood watching, the girl closed her eyes and drifted back into sleep. And he knew he would never let harm befall her.

Returning to his mother, Eros relayed what had happened. Aphrodite flew into a rage and a feud flared between them. In her rage Aphrodite placed a curse upon the girl in the form of a hedge of invisible thorns, so that no suitor could come near. In retaliation, Eros decreed that while the spell was upon Psyche, no business of love would be done. He told Aphrodite that her praises would not be sung and without praises she would dry up and become a vicious old harpy. True to his word Eros refushed to shoot his arrows. People stopped falling in love with one another, no marriages were made, no babies born. The world seemed to grow old and dull in a day. Without love work died; farmers did not plow their fields, ships crawled listlessly on the seas and Aphrodite, goddess of love and beauty, began wasting away in the parching despair that came off the earth like a desert wind. Weakening, Aprhrodite again called to her son, saying, you may have your way, you may have the girl. Sharpen your arrows and take her.

So Eros filled his quiver with arrows, stood upon a low cloud, and shot as far as he could. And man and woman awakened to each other again. Fish leaped in the sea, Stallions trumpted in the fields, sounds of the earth holding revel came to the goddess on the mountain, and she smiled. But in the castle down below the parents of Psyche still grieved. For in the land where love had returned, no one asked for their daughter. Taking matters into their own hands, they went to an Oracle.

And they Oracle said "Psyche is not meant for mortal man. She is to be the bride of him who lives on the mountain and vanquishes both man and god. Take her to the mountain and say farewell."

So Psyche was taken to the mountain dressed in bridal garments and hung with jewels. The whole court followed, mourning, as though it were a funeral instead of a wedding. But Psyche listened to the soft howling wind and believed the words she seemed to hear and was not afraid. The wind lifted Psyche and carried her to the courtyard of a castle, gleaming like silver, high above a hilltop. She was fed and cared for by invisible servants. And as the night deepened she heard a voice in the room. A powerful voice speaking very softly, so softly that the words were like her own thoughts. "You are Psyche, I am your husband." She could not see him but stretching out her arms she felt him. A swoon of happiness darkened her mind, the torches went out one by one. When she awoke the next morning, she was alone. But Psyche was so happy she didn't care.

Day after day went by and night after night he came to her. One day Eros asked her "Are you happy? Can I bring you anything, give you anything?" And Psyche replied "Nothing, husband, nothing, only yourself. I want to see you, I want to see the beauty I hold in my arms." Eros told her that it was not yet time but it would happen. He said you are lonely, I will bring you your sisters to visit.

The next day the sisters arrived and Psyche led them into the castle. Where is your husband they questioned, why did he not meet us? And poor Psyche unable to bear her sisters' barbed comments told them how things were. He is a monster they cried, beautiful creatures like to be seen, only ugliness hides itself away. You have married a monster that will devour you they cried. Psyche refushed to listen and sent the sisters away, but as the day wore on the words stuck in her mind like poison. Why would he not let her see him? She thought of her sisters' saying, "How do you know what he does when he's not here? Perhaps he has dozens of castles scattered about the countryside, a princess in each one, that he visits." And then jealousy, more terrible than fear, began to gnaw at Psyche. The idea that he might have other brides clawed at her. She felt if she could only see him her doubts would be resolved.

That night as dusk began to fill the room, she took a lamp, filled it with oil, lit it and placed it in a niche in the wall where it's light could not be seen. She sat down and awaited her husband. Late that night, as her husband lay sleeping she crept away and took the torch. She tiptoed back to where he slept and held the lamp over him. There in the dim wavering light she saw a young god sleeping. Her heart sang at the beauty of him and leaning forward she kissed him upon the cheek. Still holding the lamp a drop of hot oil fell upon his shoulder awakening him. Reaching up he grabbed the lamp and doused the light crying out to her "You are not ready to accept love and I cannot live where i am not believed. Farewell, Psyche."

The voice was gone. She rushed into the courtyard calling for him. She heard a dry cracking sound and the castle was gone. The courtyard was gone, everything was gone. She stood among the weeds and the brambles. All the good things that had belonged to her, vanished with her love.

From that night on Psyche roamed the forests searching. And some say she still searches the woods and dark places. Others say that Aphrodite turned her into an owl, who sees best in the dark and cries, "Who...? Who...?" But believers say her husband forgave her, finally; that he came back to her and took her up to Olympus , where she helps him with his work of making young love. It is her special task, to undo the talk of the bride's family, and the groom's. And Psyche herself whispers to them, none but love know the secret of love, that believing is seeing.

Are you a Believer? 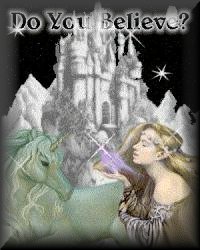 Visit Angel Twin's by clicking the button below.

Look what followed me home from BatzBelfry! 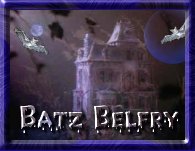