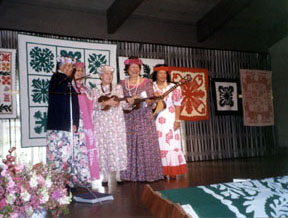 Long before the first westerners reached the islands of Hawaii, the Hawaiian people were making a fabric called "KAPA" from the inner bark of the paper mulberry tree. From this, pounded into multiple layers and sewn with bone needles and natural fiber threads, they made clothing, bedding and sails for their canoes. Often the resulting fabric was dyed and decorated with elaborate patterns. When used as bedcoverings these fabrics were called "KAPA MOE".

When the missionaries brought woven fabrics and piecework quilts to Hawaii, their sewing techniques and materials were quickly adopted by the Hawaiians. Not so their quiltmaking methods.

To the natives it must have seemed foolish to cut fabric into bits and then resew them. Instead their designs were cut from solid pieces of cloth and appliqued to a fabric background forming a decorative top. Batting of wool, cotton, or natural fibers was placed between this top and an undecorated backing. The three layers were then stitched together forming a quilt similar to those seen today. Quilts made in this manner were, and still are, known as "KAPA APANA".

Legend says that the first Hawaiian Quilt designs were inspired by leaf patterns falling on fabric laid out to dry. Certainly designs found in nature were among the earliest used and are still among the most popular. The "ULU" or breadfruit tree is often the subject chosen as the design for a first quilt because of its importance in traditional Hawaiian life. It is believed that the making of an Ulu quilt insures adequate food and a lifetime of prosperity for the maker.

Although many quilt patterns are representational, even those drawn from nature tend to be based more on impressions than on reality. Most often they portray the designer's perceptions or feelings about the subjct rather than what actually exists. Others incorporate significant themes from the maker's own life experience, eg. important places, activities or events. Images from dreams may provide design inspiration and frequently include personal symbolism known only to the designer.

Historically, quilts were not sold; rather they were made as gifts of love, "ALOHA", for family and friends. Original patterns were carefully guarded and rarely shared, even among relatives. Use of a pattern without permission from the maker was considered shameful.

It is a generally accepted belief that a part of the maker's spirit is incorporated in the finished quilt. Openings, "PUKAS", in the quilt pattern, particularly a center opening, may have been intended as entrances and exits so the spirit would not become trapped. Quilts were often destroyed at death or buried with their maker so that all parts of the spirit might be reunited.

Early quilts were usually made on a background of muslin sheeting appliqued with a brightly colored fabric design. Red on white was particularly popular, perhaps because of easy availability. Quilting styles at first were adapted from the geometric linear or circular motifs used by the missionaries. These soon were modified into more elaborate patterns and finally into the contour or "echo" quilting which is in common usage today.

During the latter years of the monarchy and particularly after Queen Lili'uokalani was deposed in 1893, quilt patterns incorporating themes of royalty, "ALI'I", and of the royal palaces became significant as symbols of Hawaiian identity. Particularly honored was the pattern known as "Ku'u Hae Aloha" -- "My Beloved Flag". Today it is considered a matter of courtesy for non-Hawaiians to request permission from members of the Hawaiian community before using these patterns.

Many older quilt patterns have been lost over the years. The Hawaiian Quilt Research Project is now attempting to find and document older and previously unknown quilts. Also, with the increasing recognition of Hawaiian quilting as a distinctive art form, permanent exhibits have been set up in many museums throughout the state. See LINKS page. An invitational quilt exhibition is held every year at Lyman Museum in Hilo in conjunction with the Merrie Monarch Festival.

Quilting has gained a respected place in the modern resurgence of traditional Hawaiian arts and crafts. A new generation of quilters is passing on their knowlege of the past as well as creating new designs for the future.