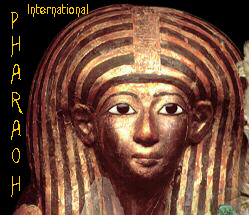 Our artists are heard on radio

PHARAOH INT'L RECORDS originally specialized in only COUNTRY MUSIC (both traditional and "new" country) with distribution focus centered within the foreign market. But, in JANUARY, 2000, Pharaoh International expanded its scope to include other genres, including rock, pop, adult contemporary, r&b, etc. The first artist signed to Pharaoh in the new Millennium was non-country (pop-rock), singer/songwriter, Dain Carlton, with a release on the Pharaoh label in April, 2000 entitled, "SEPARATE SKIES".

While most all specially screened artists have done exceedingly well on receiving airplay, several of these embraced the market (e.g. Lynn Johnson, Garry Johnson, Tom Woodard, P.J. Price, Jess McEntyre, Lola Davis, Kristene Louis, Paul Mateki, etc.) with constant chart action in the top-20 on such recognized and reliable charts as the European Country Music Association (ECMA) chart, GSCMA, etc. In one month alone, SIX ARTISTS FROM OUR #4 GRC VOLUME RELEASE HIT THE TOP-30 EUROPEAN INDIE CHART, AND ONE ARTIST (Jess McEntyre) MADE IT TO THE OFFICIAL PAN-EUPOPEAN TOP-50 CHART (with predominately major acts), while artist Paul Mateki has been a number one favorite (topping the charts) in Europe for the past few years (on several labels) and Gary Rolf Daniels was reported (from volume #5 in summer, 1999) as one of the most often played new artists in Europe. While Woodard, himself, is a recording artist - he has long been a popular traditionalist among countless D.J.'s in both Europe and the U.S.A. on those radio stations that specialize in the more traditional formats.

In addition to its solo artists single & album projects' success rate (e.g. Charlie Kyles hit #5 in Billboard with "It's Taken Years To Call It A Day"; Tony Garron hit the top-30 album playlist chart with his CD album, "Stop The Rain"), Pharaoh International is also highly reputable and well known for its successful "GOLD RUSH COUNTRY" compilation CD series, of which six volumes were produced from 1995 to 2000. Volume One of this series won Pharaoh "ALBUM OF THE YEAR" in 1995 from the Country Music Associations of America organization. Other awards presented to Pharaoh International Records and artists who have recorded for Pharaoh have included "Independent Label of the Year", "Trade Publication of the Year" (for "Country Note Connection" magazine), "Rising Star-Modern Country" (Tony Garron), "Christmas Song of the Year" (Lola Davis), and several awards presented to Phillip Clarkson for his outstanding music videos. Country star, Sonny Martin, who joined Pharaoh International on its July, 1997, third volume release of GOLD RUSH COUNTRY, is best known for achieving a #1 GOLD RECORD HIT in the United Sates of "Truck Driving Man", now considered a true country classic.

With the completion of the compilation #6 volume CD in the GOLD RUSH COUNTRY series (2000), an entirely new series entitled "A LIL THIS 'n THAT" commenced with volume one released in 2000 and volume two in 2001. Volume three of that series (which is actually our 9th compilation CD project) is now in release (see artists and titles of that volume below). The difference between GOLD RUSH COUNTRY and A LIL THIS 'n THAT is not really much, other than perhaps a little more variety in style on the new series with open invitation to artists of all styles to submit their artist packages for review and inclusion consideration. If you have never received any product from us and are in the business (i.e. Program Manager, D.J., Trade Editor, Agent, Manager, Major Label, etc.) and would like to be placed on our mailing list, please contact us and we'll be happy to send you a complimentary copy.

Artists LOVE to receive fan mail, so if this is your first visit to the PHARAOH home page and you find an artist via browsing through all the artists' individual pages and would like to write to any one of them, feel free to email the Pharaoh office and we will be delighted to forward your mail on to the artist(s). In the "subject" field of your email, type the artist's name in all upper-case letters. Each artist would also be happy to reply to such fan mail. In this business, FANS ARE THE MOST IMPORTANT PEOPLE THAT MAKE UP THE ENTIRE BUSINESS, FOR WITHOUT FANS, THERE WOULD BE NO BUSINESS!

For more detailed information on any of the above content, please e-mail BOB STEIN at the e-mail address at the top of this page (or on any artist's page). Please state your interest (and background if in the business), and we will respond immediately as we try desperately to respond to ALL email the day it arrives. If you are responding on a business level, we will then send you a U.S. postal mail address of where to mail any submissions if requested. Regardless, all email will be answered. You may also write a personal letter and send it to: Pharaoh Records, Individual's Name You Wish To Contact, P.O. Box 30115, Knoxville, Tennessee 37930-0115, USA

(The below artists who comprise the newest CD range in style from traditional and contemporary country to rock, pop, patriotic, and even an instrumental.)

Check back to visit with "new" artists who are appearing on the newest CD, yet to be posted.

(Note: Pharaoh has hosted a web site now for several years yet had never included a guest book. This year we included one finally and we now invite visitors to sign our NEWLY ADDED GUEST BOOK by clicking on the link below to let us know what you think about our site and our artists. We would like to add, furthermore, that we intentionally keep our web site "basic" (i.e. minimal graphics) with a focus more on information. Thank you so much for visiting and please come back!!!)

This homepage is a Market Tech AWARD WINNING site

THIS PAGE HAS BEEN VISITED

TIMES; THANKS AND COME BACK