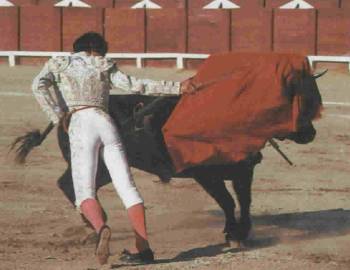 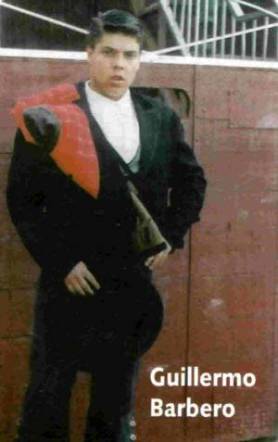 Guillermo Barbero
Guillermo Barbero was a modest bullfighter from childhood to adulthood but never achieved the stardom he seemed destined for as a very young man. He was active in Spain in the 1980s. 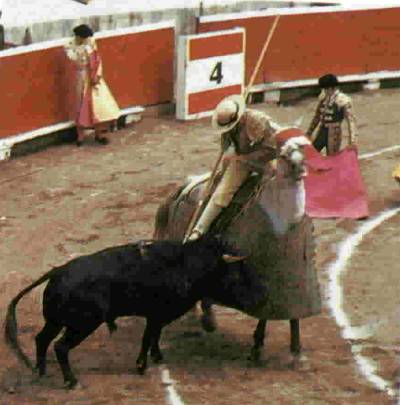 Morucho
Morucho, a somewhat unfitting nickname for a capable picador, is seen here plying his trade. This man was active in the Mexican rings for most of the 1970s through the early 1980s and well respected for his work. 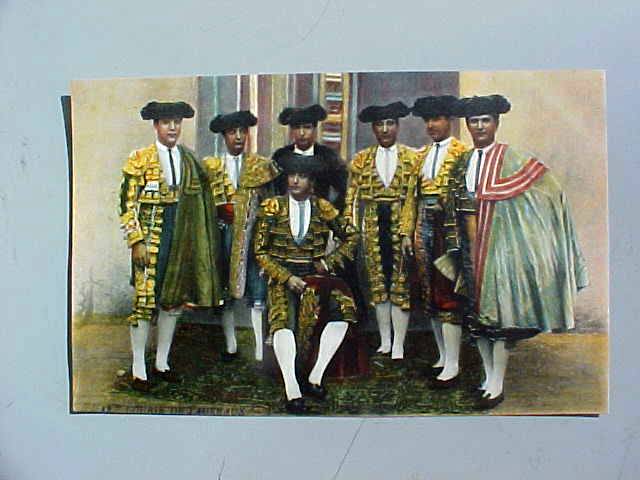 Fuentes
Antonio Fuentes was a prominent old time bullfighter who killed many bulls and lived to tell the tale. He is seen here among a group of fellow matadores and banderilleros in an image taken off an old French postcard. Fuentes was known as a dominator with the lure and a great swordsman. 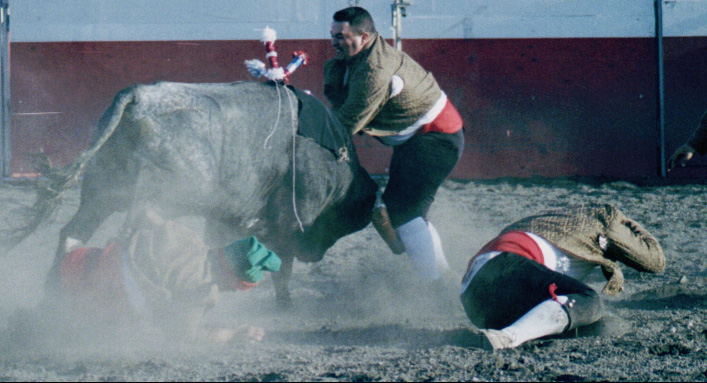 Suicide Squad from Turlock
While the Forcados--a group of people who wrestle the bull to a standstill--have been seen mainly in Portugal, this group from Turlock remains active doing the same at bloodless bullfights in California. 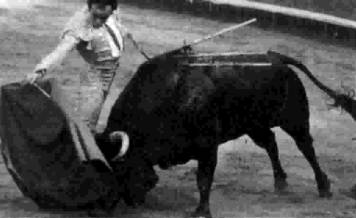 Salvador Farelo
Coming from Valencia, Spanish matador Salvador Farelo was known as a valiente who risked his welfare in the bullring with more guts than art. Oddly enough, one of his greatest triumphs came in Nogales, Mexico, not Spain, where he won a "golden ear" trophy in 1977 as part of a "best matador" competition. 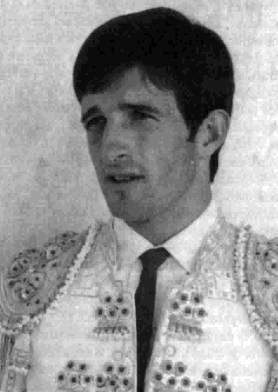 Paco Aguilar
In spite of an impressive showing when he confirmed his alternativa in Madrid in the summer of 1977, Paco Aguilar never became a top star in Spain. He remained a good performer for several years and was respected for his bravery, but never reached the top in the trade. 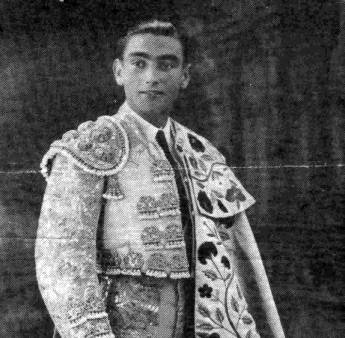 Juan Tirado
A promising novillero from Cordoba, Juan Tirado died in 1938 from a goring in the knee, which led to the amputation of his leg, but not before a fatal case of gangrene set in. 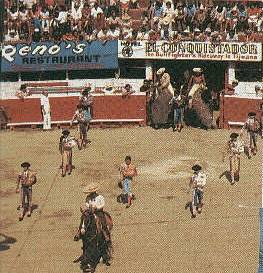 Fernando De La Pena
Fernando De La Pena, seen here between El Cordobes and El Ranchero in Tijuana, was a capable matador from Monterey but lacked the political connections to go as far as he should have in the bullring. He is best remembered for a song in his honor by Los Trianeros. 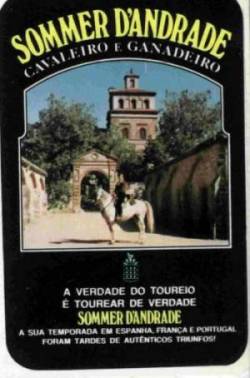 Andrade
A popular Portuguese rejoneador fighting off horseback and bull breeder, Andrade was a major star in this form of bullfighting in the 1980s and 1990s. 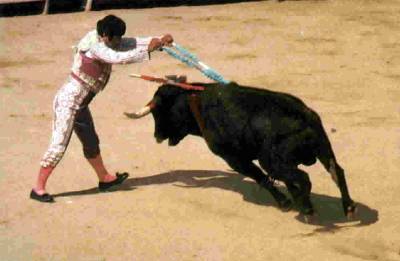 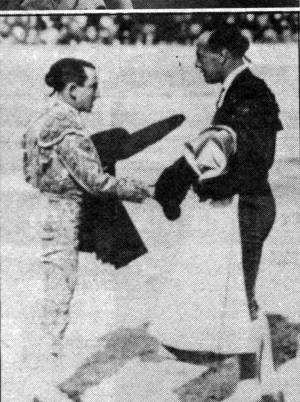 Pajarito
Pajarito, seen here left of matador Ignacio Sanchez Mejias, was a modest bullfighter, gravely gored in the intestines in 1930. He lived for two years and underwent many surgical treatments before eventually dying from the complications of his wounds. 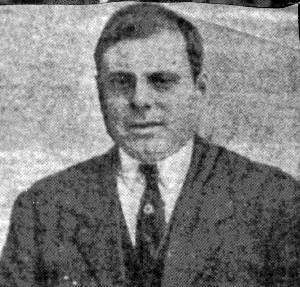 Angelillo
Angelillo was working as a banderillero for the matador Malla, when in 1916, he was critically gored in the leg while placing banderillas in Jaen, Spain. He died in Madrid from the wound a few days later. Oddly enough some four years later, Malla, his employer, was also gored and killed by a bull. 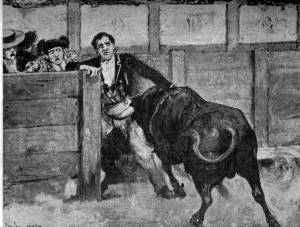 Bocanegra
This sketch entitled The Death of Bocanegra tells the tale of one of bullfighting's tragic figures. A top matador in the 1880s, Bocanegra was a spectator at a novice bullfight in Baeza when he saw the young toreros on the card having a difficult time. Between bulls, he asked permission from the promoter to go down and advise the younger men and to offer his capework as an assistant. In doing so, however, he found himself in trouble and was trapped against the fence, where he received a huge goring that killed him. 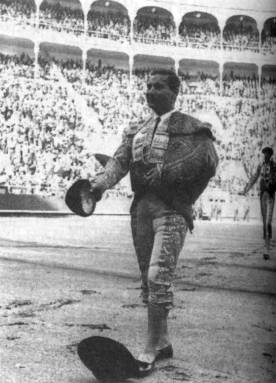 Antonio Bienvenida
Antonio Bienvenida had a father who was a famous matador and several matador brothers. He spent several decades in the bullrings of the world, only to be killed on a ranch after retirement, caping a cow. He was tossed and received a broken neck. 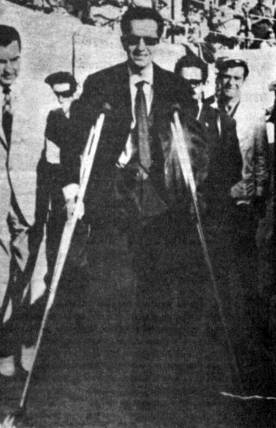 Carlos Corbacho
Carlos Corbacho was a promising Spanish bullfighter until a goring caused him to lose a leg. He then retired from the bulls and became a manager. 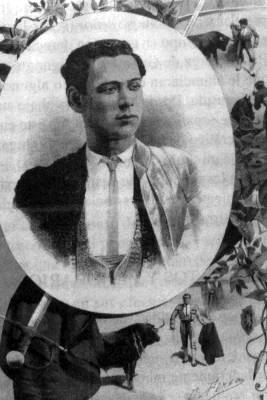 Torerito
Torerito was a popular matador in the 1890s, alternating with the likes of Guerrita. His nickname means "Little Bullfighter" in Spanish. 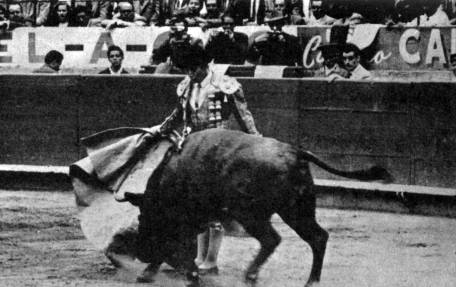 Miguel Angel
Mexican matador Miguel Angel was brave, but the victim of many bad gorings including a wound in the mouth in Spain and a massive leg wound in Nogales, Mexico. He became desolute and died on the street. The body was set to be used for medical dissection before it was identified by a bullfight fan. 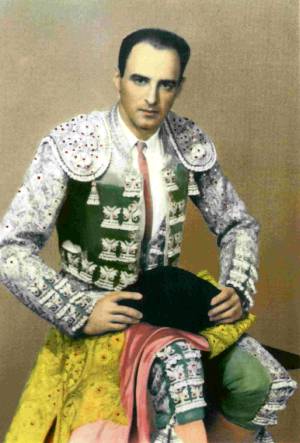 Jesus Solorzano
The father of the more contemporary Jesus Solorzano depicted in our special gallery was also a fine matador from the 1940s, known for the same style as his son. He was especially graceful with the big cape. 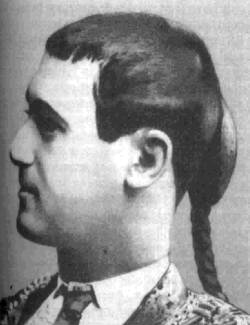 Fabrilo
A matador from Valencia, Fabrilo was gored while placing banderillas. Suffering from infection which killed him, it was found medics had accidentally left a torn piece of his uniform sewn into the goring when they treated him, and this helped cause his death. Oddly enough, his younger brother Paco wore this same illfated custome in tribute to his brother, and was likewise fatally gored wearing it.