Victor Puerto
For more information on this exciting, contemporary matador, seen here in a training session with a calf, visit his Web page in our Links section. Puerto is a charismatic and fiery performer. 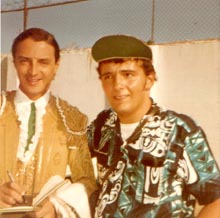 Jesus Solorzano (left)
The son of a famous Mexican matador of the same name, Solorzano was a major draw from the 1960s through the early 1990s. Known for graceful work with capote, banderillas, and muleta, he registered many triumphs in Juarez, Tijuana, Mexicali, Nogales, and other Mexican bullrings. He also appeared in Spain. He ultimately returned and started to promote bullfights in the resort town of Cancun. 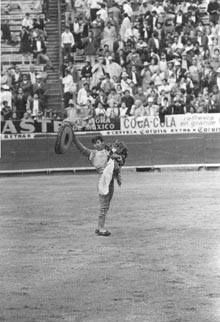 Fabian Ruiz
This Aguascalientes-born matador was daring and reckless in the ring, especially noted for his work with the banderillas. He might have gone to great heights, had it not been for a major goring in the lung when in Tijuana, which hampered his career. 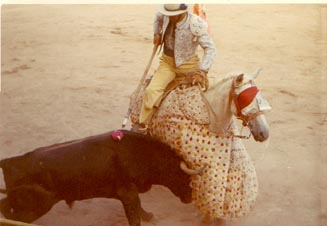 Andres Median "TinTan"
Deriving his nickname from the comic actor, this picador remained one of Mexico's most famous in the 1960s-1970s. 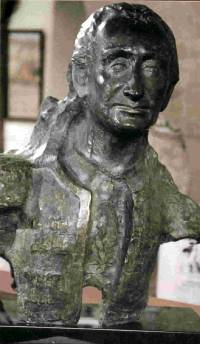 Julio Robles
Julio Robles, seen here in this sculptured bust, was a popular matador from Salamanca, Spain, known for his artistic work and style. He was forced out of bullfighting after being tossed while working with the big capote, receiving spinal injuries which left him in a wheelchair for the rest of his life. He died in 2000 from natural causes. 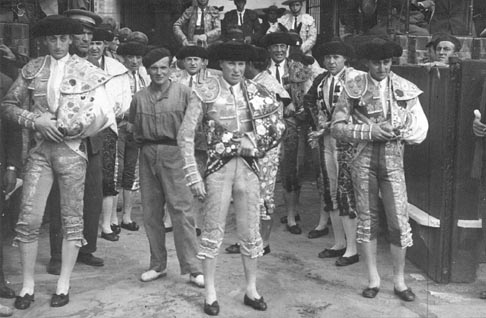 Manolete, Pepe Luis Vazquez, and Juanito Belmonte (left to right)
Three of Spain's legends. Manolete (1917-1947) is still regarded as the greatest matador of all time by many, ruling the bullrings of the world from 1940 until his death in the ring in 1947. Pepe Luis Vazquez, with whom he appeared often, was likewise highly regarded for his graceful style; and Juanito Belmonte, the son of the aforementioned Juan Belmonte, was a majestic performer but could never escape his father's famous shadow. 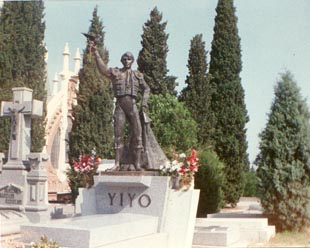 Jose Cubero "Yiyo"
He was only 21 and rising to fame when he was killed in 1985, the horn entering his side and splitting his heart in half, in Colmenar Viejo, Spain in August of 1985. His gravesite, depicted here, has become a Madrid landmark, with a statue depicting his likeness. 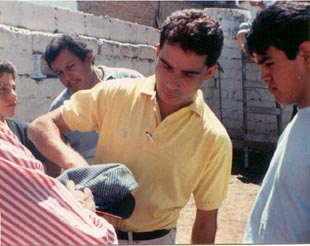 Eligio Garcia (in yellow shirt)
A popular Mexican matador, Garcia drew some acclaim in the 1990s, especially for his placing of the banderillas. 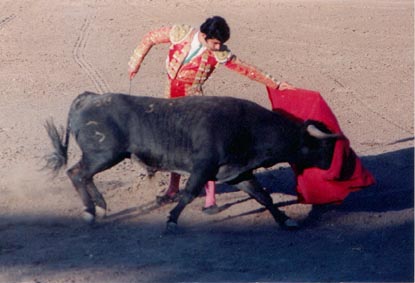 Rafael Gil "Rafaelillo"
A popular but often injured Mexican matador who was known for his flashy style and work with the banderillas. During the 1970s-1980s, he appeared regularly in both Mexico and Spain but was most popular along the Mexican border. He rose to fame after an event in Tijuana where he killed five bulls, when his fellow bullfighters, Mario Sevilla and Marcelino Librero, were gored. 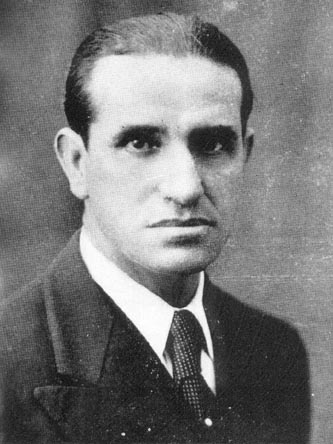 Juan Belmonte
An ugly troll of a man who revolutionized the bullfight with radical bravery. He was called the "torero of four oles and an o...." for this was usually the number of passes he got off before being tossed or gored. Though everyone expected him to die in the ring, he lived to see old age and end his own life with a pistol in 1962. 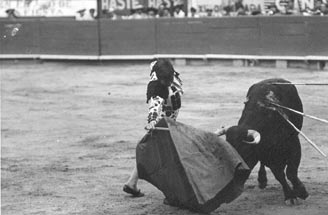 Manuel Benitez "El cordobes"
The long-haired valiente from Palma Del Rio, Spain ruled the bullrings of the world from the early 1960s until the early 1980s. Known for comebacks after many bad gorings and for a crude but exciting style, he was the topic of many books, documentaries, and oil paintings. The story of his life was told in multiple languages in the book Or I'll Dress you in Mourning which also became a stage play starring Tom Jones (who looked nothing like Cordobes) and was retitled Matador. 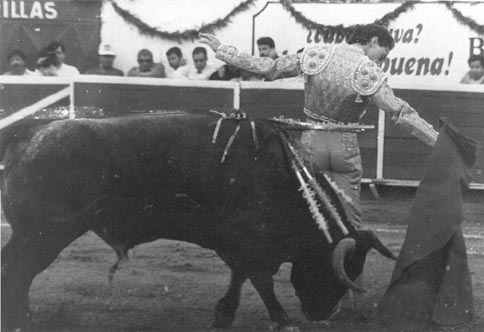 Alejandro Silveti
The grandson, son, and brother of bullfighters, this fiery Mexican matador rose to prominent status in the late 1980s onward, with major triumphs in Tijuana, Juarez, Mexicali, Mexico City, and other major bullrings. 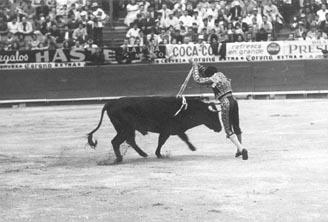 Antonio Santos
A newcomer to the bullfighting world, this Saltillo native presently maintains extreme popularity with the fans. He is known for his work with the banderillas and for his artistic, happy style. 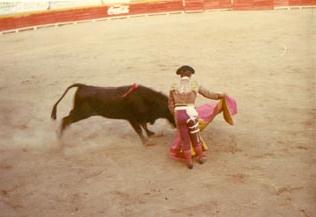 Fernando Dos Santos
This Portuguese bullfighter was known for his bravery and his insane style which made him popular in the 1970s, when he rose to fame on the Mexican bordertown circuit, such as Juarez, Tijuana, and Nogales (where he scored his greatest triumphs but also received a near-fatal goring in the neck.) He returned to Portugal, bred bulls, developed real estate, and started bullfights in the tourist resorts where he made a fortune. 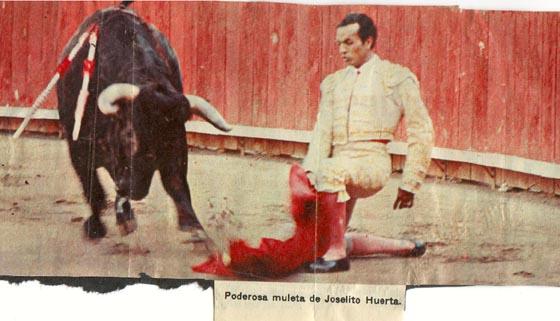 Joselito Huerta
From the 1950s through the 1970s, Joselito Huerta was a major Mexican matador who also triumphed in Spain. Curiously, it was not in his youth, but as an aging matador that he gained most of his fame. 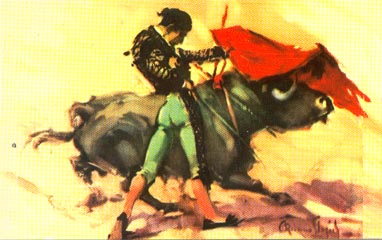 David Liceaga
The greatest of a long line of Liceagas, David may also be seen in the film The Littlest Outlaw in the bullfight scenes. He retired after many years of action, and died in 1996. 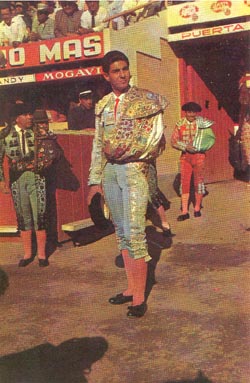 Finito
Raul Contreras "Finito" was a matador from Chihuahua who had many triumphs in Mexican rings in the 1960s. He died after a car crash in December of 1974 at the height of his popularity. 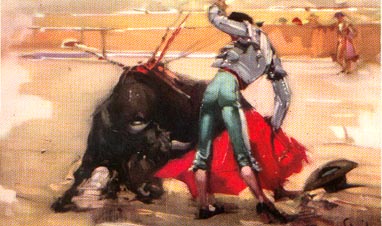 Silverio Perez
Matador and later politician, Silverio Perez was one of Mexico's legendary performers. He is seen in this painting performing a trincherazo, the pass which he perfected. 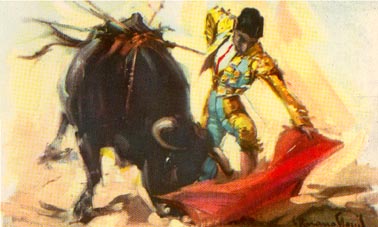 Gitanillo De Triana
The artistic gypsy matador is depicted here in all his flowing style, but he met an unfortunate end. Trapped against the fence in Madrid, he suffered a goring in the lower back but took weeks to die, suffering greatly in a hospital bed. 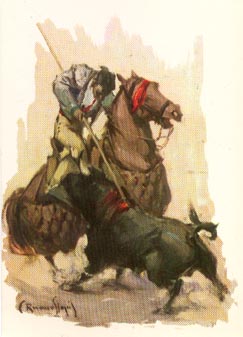 Veneno
This picador was knocked from his horse and into oblivion in Madrid in the 1920s. Doctors even attempted an early form of brain surgery to save him, to no avail.