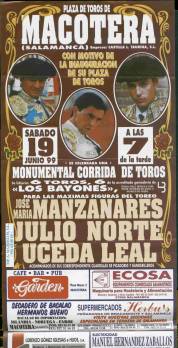 Cesar Pastor
Cesar Pastor was a charismatic Mexican matador who also appeared in Portugal and South America. The brother of matador Victor Pastor and the son of a bullfighting manager, he reached his peak in the early 1990s. His high point was work with the banderillas, though he was good with capote and muleta as well. His only weak point was the sword, and his kills were irregular. 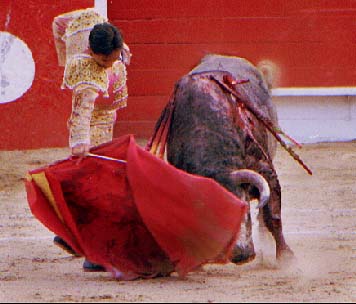 Jose Luis Luevano
Spanish matador Jose Luis Levano has had more success in Mexico in recent years and put together a massive fan following, especially along the border in Tijuana and other places. Active now, he is known for grace and style with the muleta, as seen here. 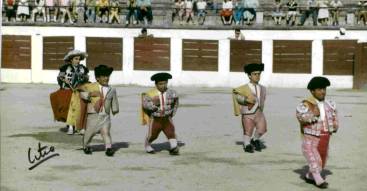 Cordoba Taurina
A popular comic group consisting mainly of midget bullfighters, Cordoba Taurina was popular in Spain in the 1980s. While many comic teams seen throughout history have been about as funny as a train wreck, this group was literally hilarious. 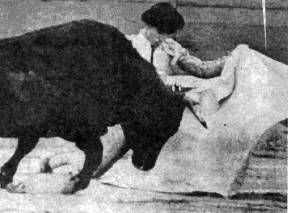 David Liceaga Hijo
David Liceaga Hijo, the son of the famous David Liceaga, was a capable matador in his own right, though always burdened with having a famous last name. He was good with capote, banderillas, muleta, and sword but lacked that certain spark that could have made him a figura. He retired in the early 1990s to become a manager of other toreros. 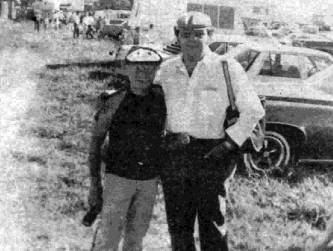 Ed Cohn
Ed Cohn (left) has spent most of his life in California where he worked as a toy salesman at one time. He also spent years as an amateur bullfighter, a photographer, and a director of numerous bullfighting clubs. During the 1970s through the 1990s, he did much to promote an understanding of bullfighting in the English-speaking world. He is still alive today and still faces a cow or calf now and again at a festival. 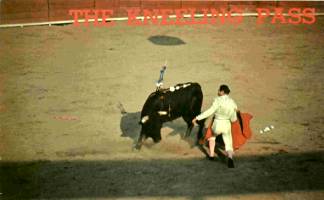 Felix Briones
Felix Briones, the brother of novillero Raimundo Briones and matador Luis Briones, came from Monterrey and was amazingly popular in Mexico during the 1960s, especially along the border. Known as a valiente who liked to place suicidal banderillas and do kneeling passes, the public loved him in Tijuana, Nogales, San Luis, Rio, Colorado, and Nuevo Laredo. He retired in 1970. 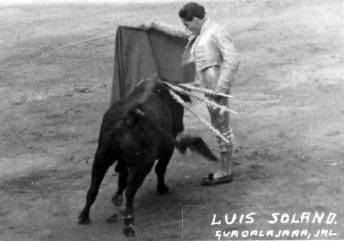 Luis Solano
Luis Solano was a popular Mexican matador in the 1950s, frequently appearing with Luis Mata of Spain and on occasion, alongside Carlos Arruza when Arruza made his return to bullfighting as a rejoneador. Solano was a good, but not great, performer. Still, he was well-liked by the fans and when inspired, gave great afternoons. 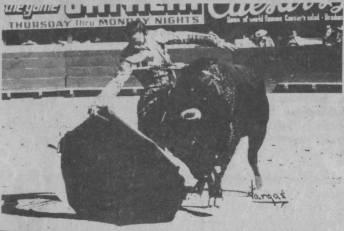 Eliseo Gomez "El Charro"
El Charro was, as his nickname suggested, a true cowboy, capable of riding, shooting, and rope tricks, as well as bullfighting. From the 1950s through the early 1970s, he was amazingly popular on the Mexican border. He retired in Nogales in 1977, cutting a total of four ears and a tail that day. 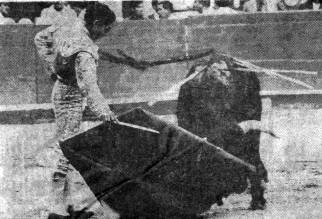 Pepe Luis Vazquez
Not to be confused with the Spanish matador of the same name, Pepe Luis Vazquez was a Mexican matador of much acclaim, especially known for his work with the sword. He was also an outstanding muletero and flashy with the banderillas. He eventually retired to become a manager, but was still appearing in various festival fights when in his late 70s. 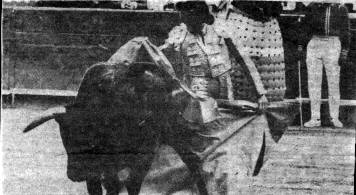 Pepin Jimenez
A longlasting Spanish torero, Pepin Jimenez seems to have been around forever, with no indication of slowing down. As seen here in this magnificent quite, his trademark is work with the big capote, though he is a confident muletero as well. See his page in our links section.

Zotoluco
Lalo Lopez "Zotoluco" was a journeyman torero who was regarded as good but not great, until 2002 when he made a highly triumphant tour of Spain and France. He returned to Mexico in great demand as an overnight hero and has been regularly featured on cards ever since. 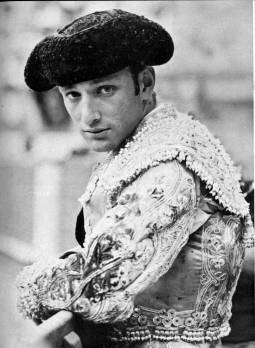 Henry Higgins
British matador Henry Higgins had moderate success in Spain, but died in a hand glider crash instead of on the horns. 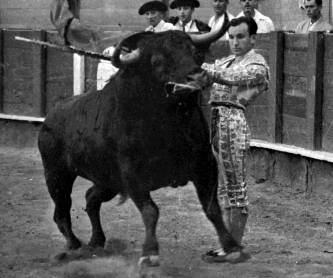 Chicuelo II
Rafael Jimenez "Chicuelo II" was the son of the legendary Chicuelo, who invented the chicuelina pass. Chicuelo II never maintained the success rate of his father but was a decent matador in his own right. 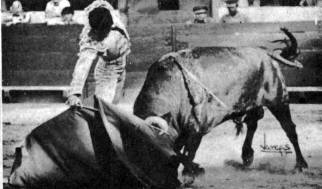 El Geno
Alberto Galindo "El Geno" from Monterrey, Mexico made a name for himself as a teenage novillero in the 1980s, but remains active even to this date in the 2000s. An outstanding muletero and banderillero, he has been a bit irregular with the sword over the years, but remains a respected matador. 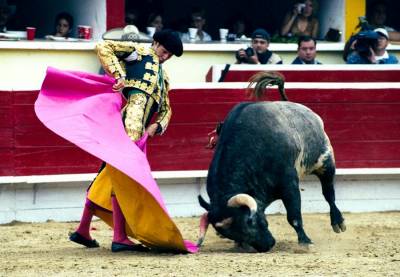 Fernando Ochoa
Fernando Ochoa, a contemporary Mexican matador of considerable ability, started out as a child bullfighter and continued into adulthood within this profession. He is now a top draw. 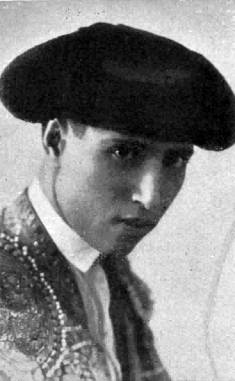 Manuel Baez "Litri"
One of the many Baez family members from Huelva, Spain, this one was the only family member thus far to die by a goring. He was seriously injured and passed away from gangrene after his badly mauled leg was amputated. Paco Cespedes
Paco Cespedes was a popular matador in South America who eventually retired and moved to the USA. For a time he was highly regarded and recognized as skilled. 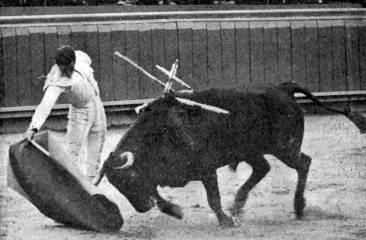 Jaime Rangel
Jaime Rangel was a popular Mexican matador in the 1960s who continued to perform until 1985 when he retired. He was known for a dry style, almost "too perfect" to be appreciated by some of the fans he appeared before. He was especially graceful with the big capote. 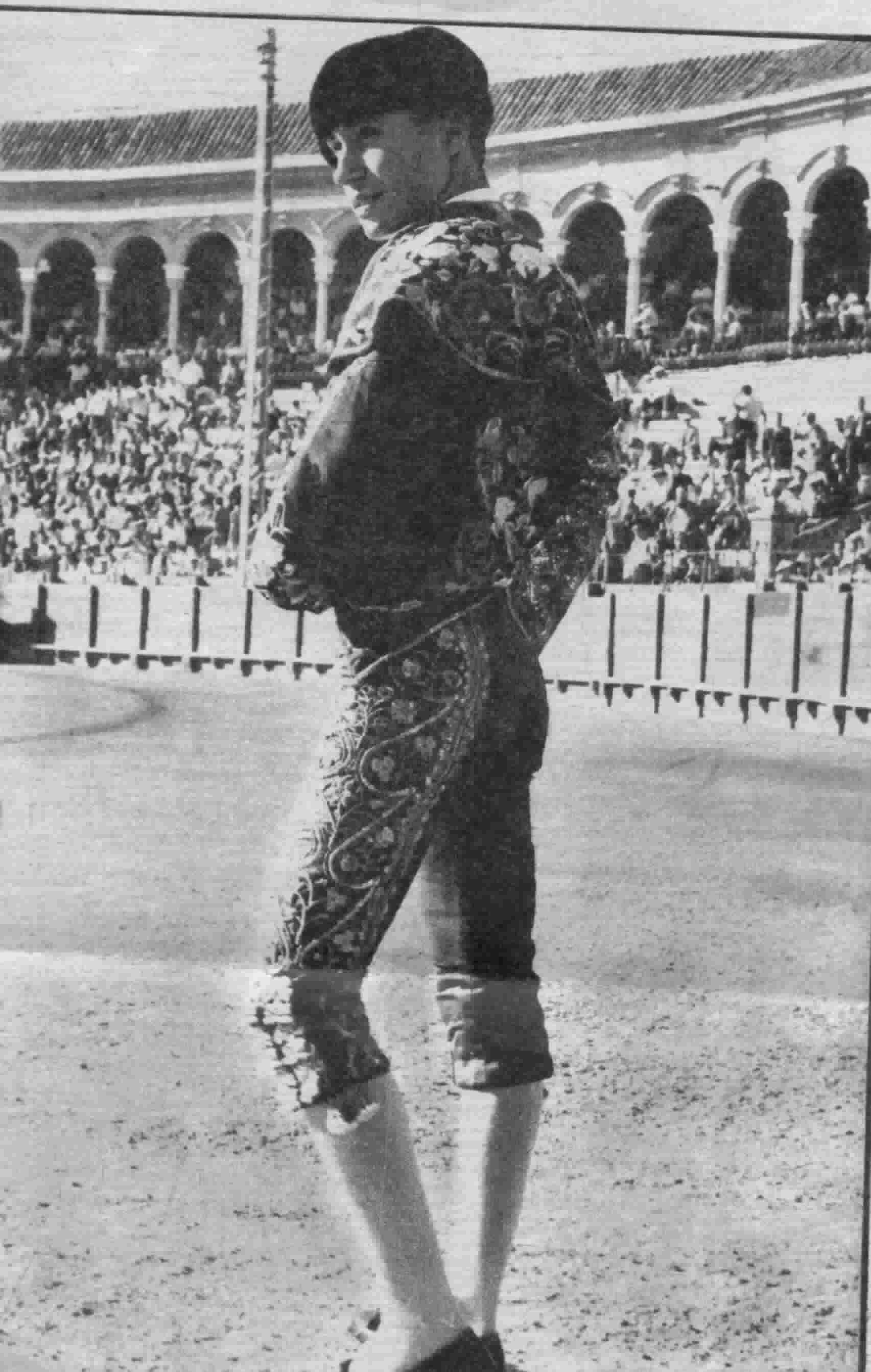