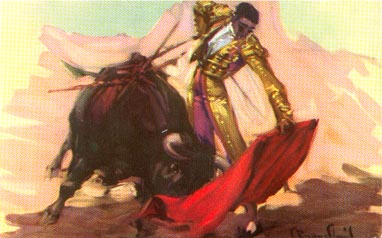 Fermin Espinosa "Armillita"
The father of Manolo, Miguel, and Fermin, Jr., "Armillita" was a Mexican matador or great prowress and the topic of the Lara song in his honor. He also served as a stand in for Tyrone Power in the bullfight scenes of Blood and Sand. Capable in all phases of the bullfight, Armillita retired and lived to see his sons become recognized in the ring before he died in the late 1970s. 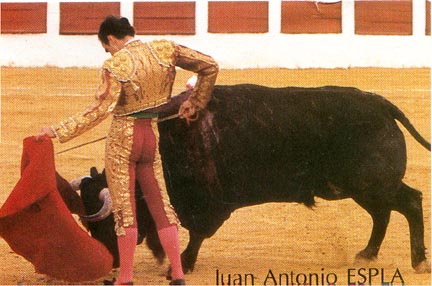 Juan Antonio Espla
Juan Antonio, the second of the famous Espla brothers team, was popular in the late 1970s through the mid-1990s in Spain. He was especially well known for performing rarely seen passes with the big cape and for placing the banderillas. 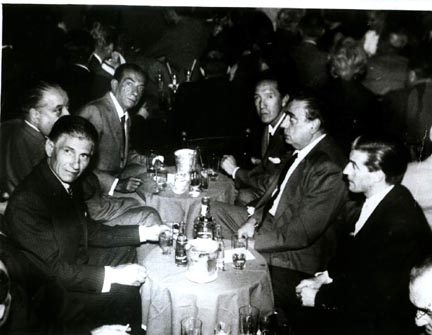 Cagancho
Father of the matador Cagancho Hijo (see page one of Who's Who) seen in the company of varied associates. A "torero gitano" known for moments of extreme grace and beauty, plus other afternoons of superstition and cowardice, he spent many years as an active torero. His last years of activity were spent in Mexico rather than his native Spain, where he died of natural causes some years ago. 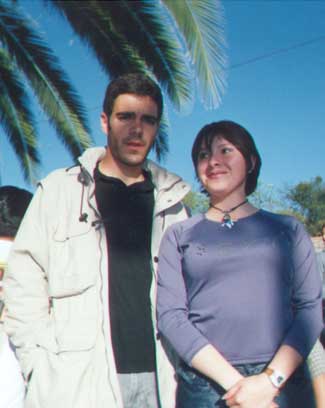 Jose Tomas
Spanish matador Jose Tomas became an international star in the 1990s and is still going strong at this moment. For information on his career and activities, see his personal Web page, reachable in our links section. During the early 2000s he became one of the world's most recognized bullfighters. Christian Hernandez
Seen here with a female writer in his native Queretaro, Mexico, where he attended the regional bullfight school, this is a young and colorful torero with a great deal of promise. Hopefully much will come from him in the future, as he has the makings of a top name. 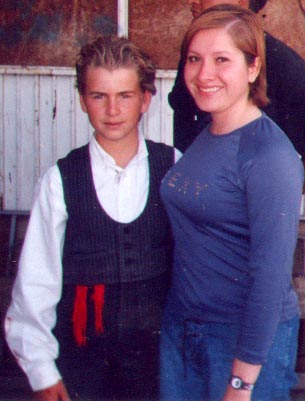 Payo
Another graduate of the bullfighting school in Queretaro, Mexico, Payo has shown initial promise and may likewise become a top name in the years to come. He is especially talented with the muleta and is an emotional performer. 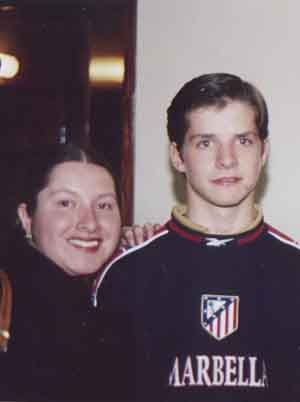 Paulina Romero
Seen here with matador El Juli, Paulina Romero is a young Mexican woman who has entered a world few other females have excelled at--that of writing screenplays/stage plays about bullfights and covering the bullfights for several columns, both in print and on the net. 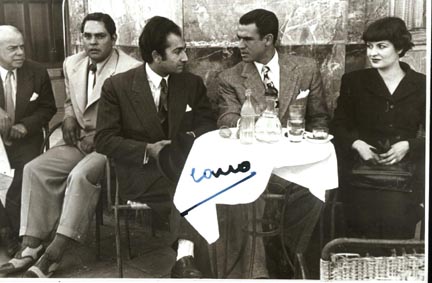 Rafael Albacin
Coming from a long line of flamenco dancers, bullfighters and writers--before and after--this member of the dynasty was perhaps the most famous of the whole clan. He spent several years in the world's bullrings and was especially known as a good swordsman. He also played in some bullfight films. Luis Freg
While he had a younger brother, Miguel, who was killed in Madrid via a goring in the neck, Mexican matador Luis Freg survived over 50 horn wounds during his long career, ranging from scratches to near-fatal injuries. In spite of this, he drowned in a river, killed in a boating accident after retiring from the bulls. 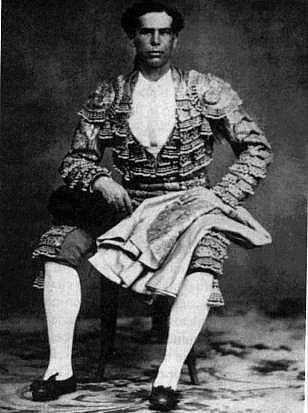 Salvador Sanchez "Frascuelo"
A legend in the bullrings during the late 19th century, Frascuelo was sometimes called "El Negro" for his preference to dress in black and gold bullfight costumes in the arena, and black dress suits outside of it. Complete and daring in the plaza but difficult and egotistical away from it, he was a complex person as well as a matador. He died of natural causes and is buried in the Carabanchel Cemetery in Madrid. A large book on his career was released in 1989, which may still be found in Spanish libraries and book shops. 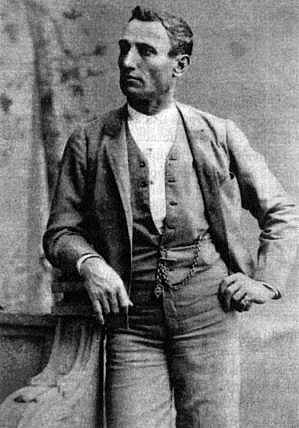 Lagartijo
Rafael Molina "Lagartijo" from Cordoba was a great matador at the final part of the 19th Century. He was a rival to Salvador Sanchez "Frascuelo," with whom he had furious competition. They had many legendary bullfights together, though Lagartijo also had some failures. One notable fiasco tells of him having a terrible time with a gigantic bull, from which he had the head stuffed and mounted out fo sheer vindictiveness. Later, after his retirement, he would come home drunk and hit the mounted head with his cane. At one time (shades of Elvis) he even shot at the stuffed head. A great matador, but definately peculiar outside the ring. 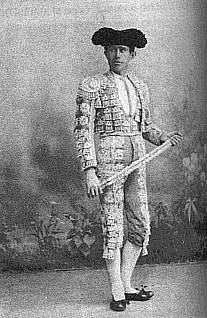 Ojitos
Ojitos was an excellent torero in his day but is best known for his work as a trainer of other Mexican bullfighters. His greatest student was the legendary Rodolfo Gaona. 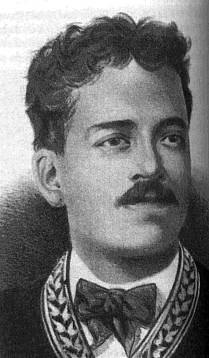 Ponchiano Diaz
Diaz was a multitalented Mexican matador in the 19th century who performed both on horseback and on foot. He was suicidal and brave, often caught on the horns, and undented in his courage. He was also one of the few bullfighters to wear a mustache in the ring. 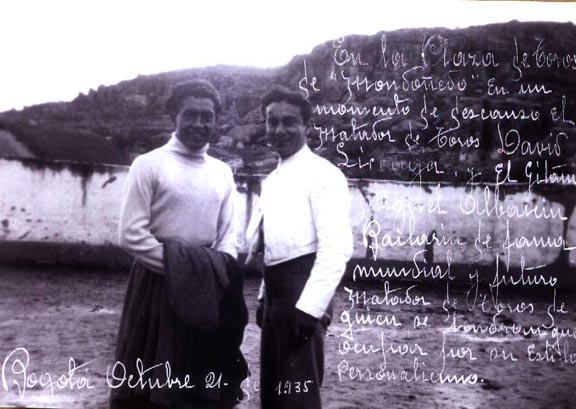 Miguel Albacin
Miguel Albacin, seen here with David Liceaga, did some brief amateur bullfighting at capeas and ranches and was an avid aficionado, but was better known in the world of flamenco. 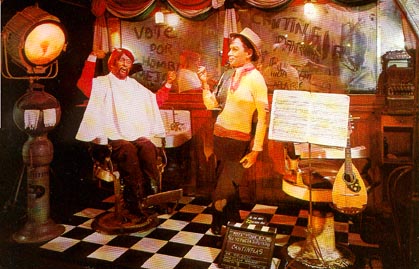 Cantin Flas
Mario Moreno "Cantin Flas," who appears here via wax image (used with permission of the big wax museum in Buena Park) was not only a film star, but a bull breeder and comic bullfighter. In this final realm, he may well have been the greatest ever. Examplex of comedy in front of the bulls may be seen in the films Around the World in 80 Days, Pepe, and numerous Mexican films where that IS him in front of the bulls. He died of lung cancer in the 1990s. 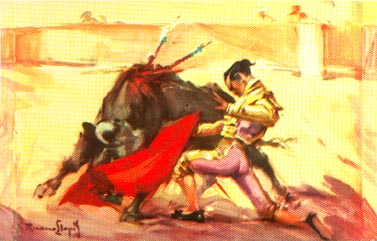 Domingo Ortega
A master dominator in the 1930s, this matador from Borox, Spain spent decades in front of the horns before retiring to own a bull ranch, which he operated till his death. 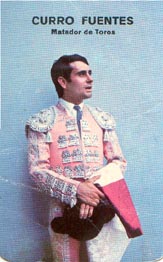 Curro Fuentes
A good journeyman matador in the 1970s, his greatest showing came in Madrid in July of 1975. Seriously gored by his second bull, he limped back, sworded it, and won a richly-deserved ear. 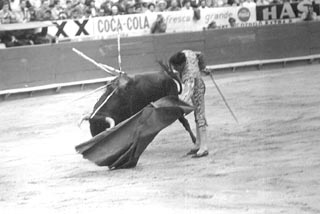 Guillermo Montes Sortibran
A popular but erratic matador active in Mexico in the 1960s, he turned in some outstanding days in major rings such as Tijuana and Mexico City, but could never maintain the pace long enough to become a star. Many of his finest moments were also ruined with poor kills. 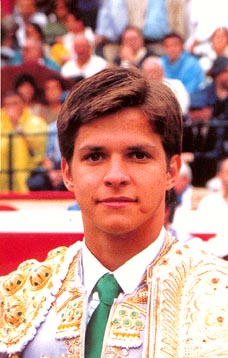 El Juli
Starting out as a child sensation, El Juli went on to become the undisputed top matador of the new century--and he is still active. With many great triumphs behind him and hopefully more to come, he is destined to be one of the all-time greats. See the Links, as a number of sites cover his exploits. 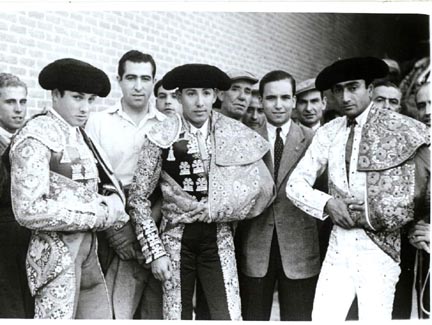 Antonio Velazquez
Seen here in the company of Pepin Martin Vazquez and Albacin, Antonio Velazquez was badly gored by the bulls many times in his long career. He received one near fatal goring in the throat, another in the lung, but refused to die. Oddly enough, he was killed in a fall off a roof while fixing a TV antenna.