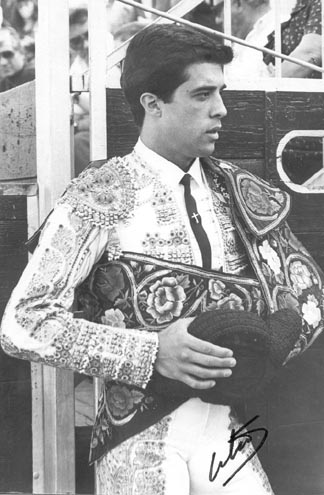 El Javi
The Madrid-based matador, El Javi, rose to fame in the early 1990s due to a graceful and flowing style.

Antonio Ordonez
Ordeonez, the son of matador Nino De La Palma, dominated bullfighting from the mid-1950s through the early 1970s before retiring to become a promoter in Carmona, Spain. He died from cancer in 1999. As a matador, his closest brush with death came from a goring in Tijuana in the 1960s. The wound itself was not terribly serious, but he was given an injection of penecillin, to which he was deathly allergic, and nearly passed away from the reaction. 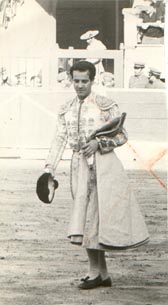 Diego Puerta
An artistic matador from the 1960s, Diego Puerta headlined many cartels in his native Spain. He was celebrated for a slow, graceful style, but received many bad gorings for his efforts. He retired from the ring to raise bulls for other men to face in the 1970s.

Antonete
Antonio Chanel "Antonete" had a career spanning from the mid-1950s through the mid-1980s and always remained popular with the crowd, especially in Madrid and Sevilla. 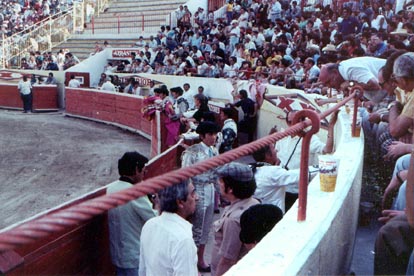 Adan Lozada
Born in Juarez, Mexico, Adan Lozada was known mainly for his appearances along the Mexican border and in bloodless bullfights in the United States. Lozada was suicidal with the big capote and spectacular with the banderillas, but weaker with muleta and sword. Though he spent many years as a novillero, he never took the alternative. Oddly enough, his most serious goring came in a bloodless bullfight in Phoenix in April of 1971, and even it was relatively minor. An amazing fact considering the insane chances Lozada always took before the horns. He is seen here in white and silver, amid others in the Juarez bullring. 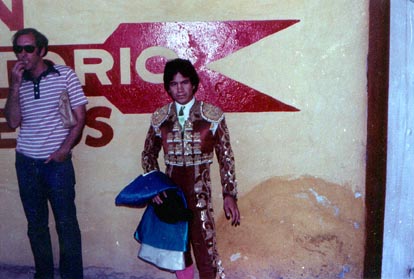 Bernardo Valencia
Unartistic but reckless to the point where bullfighting writer Lyn Sherwood called him "a suicide looking for a place to happen" after a Mexicali bullfight, this Venezuelan matador toured Spain, Mexico, and of course South America. He was outstanding with the banderillas but weak with the sword. He likewise possessed pure, raw courage, but was never accepted by serious fans due to his excessive theatrics before the horns. 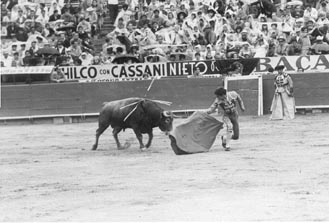 Francisco Doddoli
Appearing throughout Mexico in the 1980s and 1990s with especially successful showings in Tijuana, Nogales, Nuevo Loredo, and Morelia, Francisco Doddoli was reputed not only as a matador, but as a breeder of bulls for the ring. 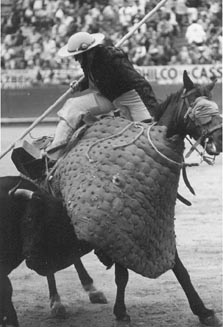 Jesus Gomez
A legendary Mexican picador who performed his duties for three long decades, from the 1960s through the 1980s in Mexico. Lorenzo Garza
Garza was a former boxer who turned matador and it showed. At times he registered great triumphs, and at other times went to jail for fighting with fans and sparking riots. One such riot started in Mexico City when he climbed into the stands and punched a spectator who had thrown a seat cushion at him. The incident started a massive riot and was even depicted in Life magazine. 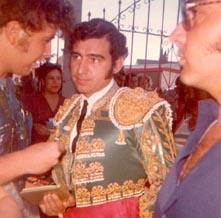 Manolo Martinez
Mexico's artistic matador who reached his peak in the 1970s with triumphs in Tijuana, Mexicali, Monterrey, Juarez, Mexico City, San Luis Potosi, Aguascalientes, and other major rings would often face and kill six bulls on a single afternoon as the lone matador. He eventually retired to become a bull breeder and manager, dying in America while awaiting heart and liver surgery. 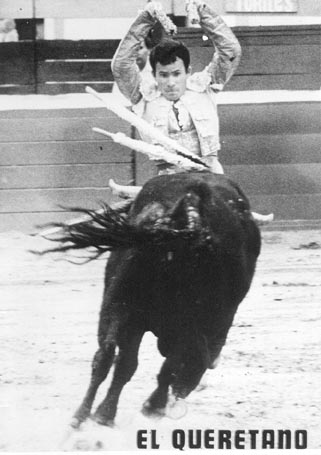 Ernesto San Roman "El Queretano"
During the 1960s and 1970s, he was a popular valiente, especially on the Mexican border. He was known for passes on his knees and a thrilling-if-unartistic manner in the ring, never losing his courage, even after a near-fatal goring in Acapulco. He retired from the ring to manage a group of midget bullfighters/comedy team and trained his son to follow in his footsteps as a serious matador. Antonio Lomelin
Antonio Lomelin was a matador from Acapulco who was known for bravery and for his flashy, complete style. A number of bad gorings, including one in the liver in Tijuana and one in Mexico City in the intestines, both while placing banderillas, all but ruined him. Confirmed problems with alcohol and brushes with the law also followed, tarnishing what once promised to be a glorious career. When out of prison, he made a brief comeback then retired. He was never the same, however, and nowhere near as brilliant as in his youth. He died in March of 2004. 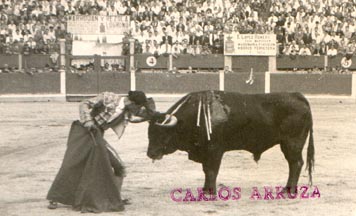 Carlos Arruza
One of Mexico's most famous performers, both on foot and on horseback, Arruza was a major international star from the 1940s through the 1960s. He was still active in 1966, when he was killed in a car-bus collission. He was known for his adornos such as resting his elbow on the bull's head or taking the horntip in his teeth. He also developed the arrucina, a hair-raising pass which led the bull past his body using only a tiny corner of the lure. 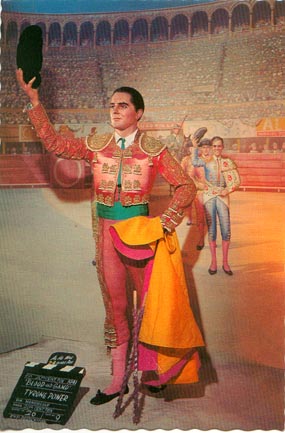 Tyrone Power
This wax figure of actor Tyrone Power is seen at the Movieland Wax Museum in Buena Park, California and is provided by them for reprinting on this site. Pay them a visit if in the area. In any case, the actor Tyrone Power won fame playing Juan Gallardo in Blood and Sand and bullfight fan Jake in The Sun Also Rises. 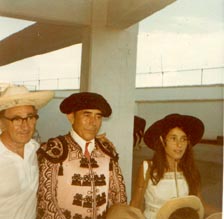 Alejandro Del Hierro
Juarez-based novillero Alejandro Del Hierro once ended up fighting bulls as a lone matador when the plaza judge ordered his alternate "inept" and had him removed from the arean by police in one of bullfighting's most uncanny episodes. Modestly successful as a matador, he later became a manager of other toreros and a popular banderillero. Antonio Jose Galan
Antonio Jose Galan doubled as a top matador and a top hair stylist from the mid-1970s through the mid-1990s. He was especially good with the sword and was acclaimed for his kills. He died in a car crash in 2001. 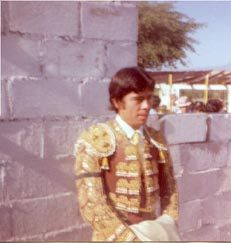 Adrian Romera
During the 1970s through the early 1980s, Romero was a popular matador seen in both Mexico and Spain. He was especially good with the banderillas but suffered two very bad gorings, one in Tijuana, one in Madrid, while executing his specialty. 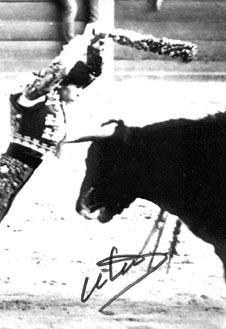 El Fundi
During the 1980s, El Fundi, a graduate of the government-run bullfight school in Madrid, was a popular matador. He is seen here in a 1989 Madrid bullfight placing banderillas. He later retired to become a bull breeder.