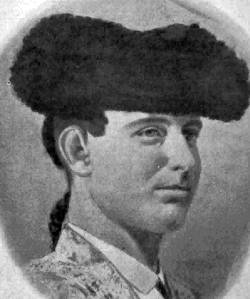 Pepete II
Another of the three ill-fated bullfighters who used the alias of "Pepete," this man was killed in 1899 from a goring which severed the femoral artery and caused his death within minutes after being injured. He was killed before his career could really advance him to stardom. 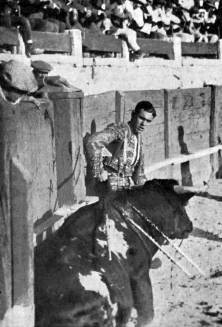 Varelito
Sevillian matador Varelito was known for his devastating kills. It was with the sword he died in 1922 when in Sevilla, his home town. Pressed and heckled by the public, he went in with the sword, devlivered a deadly swordthrust, but was caught and gored while doing so. He died a short time later, blaming the public for his injury. As he was being carried from the ring, he even shouted into the stands, "This is what you wanted. Now I've got it!" 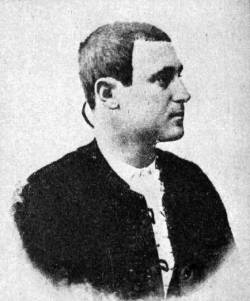 Paco Aparici
Paco Aparici, the brothjer of unlucky matador Julio Aparici "Fabrilo," had his dead brother's torn pink and gold suit repaired and wore it into the ring as a tribute. It was in this costume he likewise received a fatal wound which severed the femoral artery and brought about his death a few minutes later. Both brothers rest in the cemetery in Valencia, Spain. They are not, however, the only brother-pair killed by bulls, as Domingo & Manuel Del Campo also fit into this catagory, as do the little known Mula brothers. 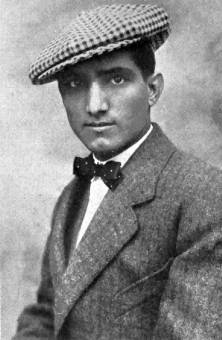 Antonio Carpio
Valencian novillero Antonio Carpio idolized Juan Belmonte and was considered by many critics to be an imitator. He was killed in 1916 from a massive goring, and now rests back in his native Valencia, along with Granero, the Aparici brothers, and others from this town. Ava Gardner
American actress Ava Gardner reportedly dated varied bullfighters while in Spain, but also starred in some excellent films with bullfight themes, most notably Pandora and the Flying Dutchman (seen here with Mario Cabre) and The Sun Also Rises. 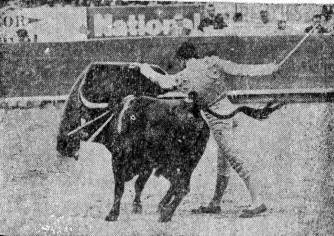 Swan Soto
French bullfighter Swan Soto has an odd name, but there is nothing peculiar about his fighting style. He is one of the better toreros in France at this time and a classic performer. Look for more from him in the future, and visit his site in our links to learn more. 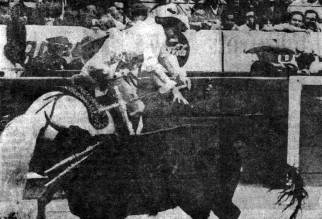 Marco Jose
Marco Jose of Portugal is a contemporary rejoneador who has made a lasting impression on European fans. He is fast becoming a major star. 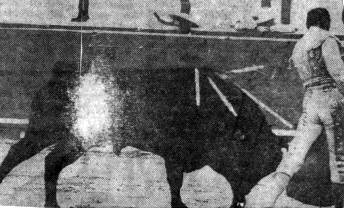 Jesus Aguado
Jesus Aguado of Toledo is another Spanish torero who remains popular with the crowd. For more information see his Web page in our links section, which offers a biography with greater detail and info on upcoming corridas. 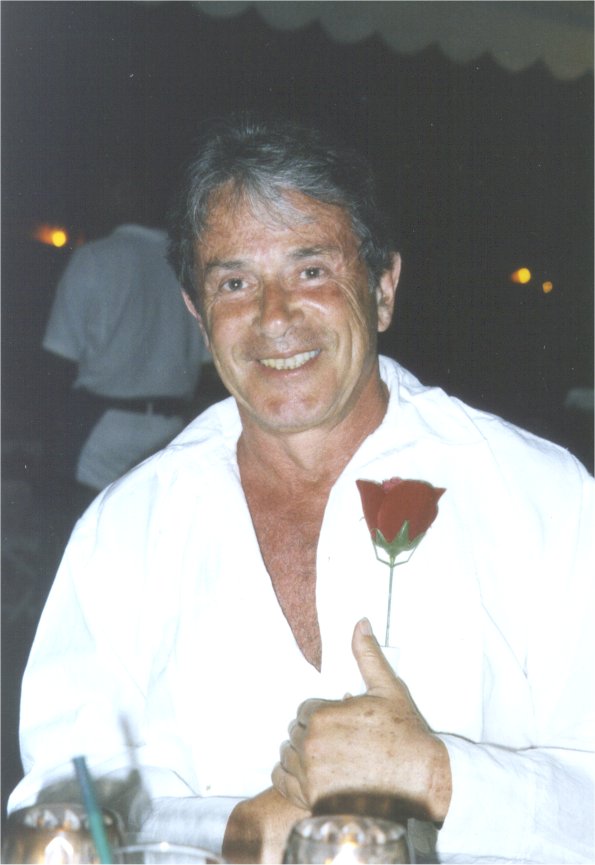 Roberto Schlosser
Film director and scriptwriter Roberto Schlosser now makes his home in Mexico City where he remains a big bullfighting fan and is rumored to be organizing some screenplays related to the bullfight theme. Over the years he was friends with many top Mexican toreros including Alfredo Leal and Manolo "Armillita." 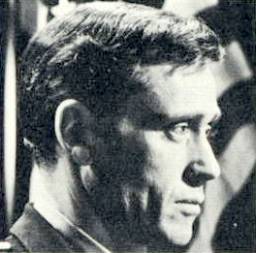 Mel Ferrar
Actor Mel Ferrar made his mark in two bullfighting films, playing the villain Cohen in Hemingway's The Sun Also Rises, and as world-weary matador Luis Bello in Tom Lea's The Brave Bulls. While he made many films over the years, these two are considered two of his personal best. 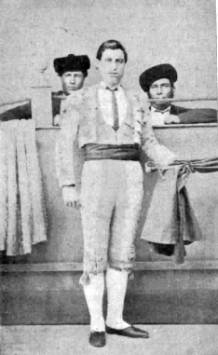 Jose Maria Ponce
A modest matador, Ponce died from a massive horn wound in 1872 and is best recalled in the history books as a victim of the profession. 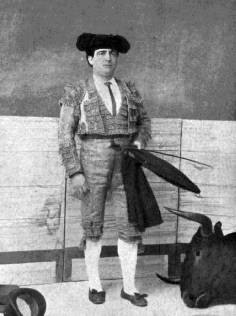 Punteret
Another of the many modest toreros who died from horn wounds, Punteret was killed in 1888 and like many companions, is remembered more as a victim of the horns than for his capacity in the bullring. 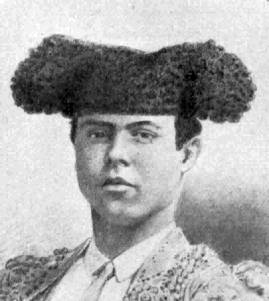 Jose Gomez De Lesaca
Gomez De Lesaca was an extremely daring bullfighter, known for placing himself in moments of unequalled danger. He died from a goring in 1896. 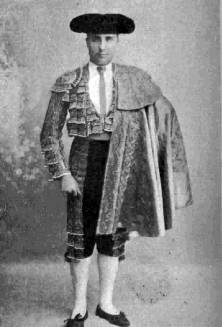 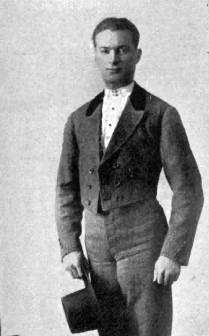 Gavira
Matador Enrique Cano "Gavira" was a respectable performer killed by a bull in 1927. 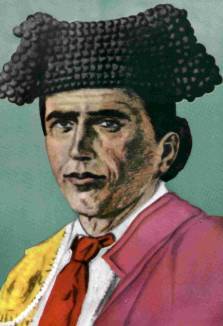 Chiclanero
El Chiclanero from Chiclana, Spain was an outstanding matador, known for valor and defiance in front of the horns. His remains were laid to rest in this city, where his tomb still remains visited by historians and bullfighting fans. 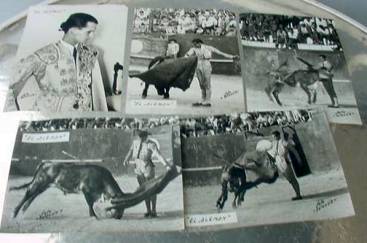 El Alemen
Herman Hauber Corterbe "El Aleman" was a German torero who tried to make the grade in Spain, with modest success. He had an amazing ability to kill well, which other more famous bullfighters would have traded their soul to equal, but never managed to make it to stardom. 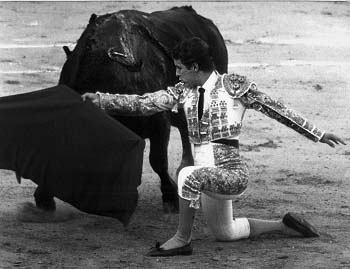 Paco Gonzalez
Paco Gonzalez emerged to stardom on the Mexican border during the 2002 temporada when he appeared in Juarez, replacing the gored Uriel Moreno "Zapata." He cut awards and received several bordertown contracts afterward, propping up his career. 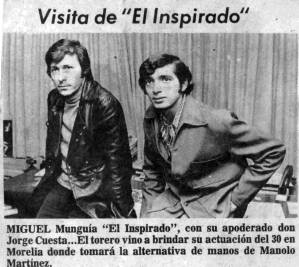 Jorge Cuesta
Jorge Cuesta (left), seen here with one of his proteges, the late Miguel Mungia "El Inspirado," was an influence-wielding manager of numerous Mexican bullfighters in the 1970s and an outstanding press agent. 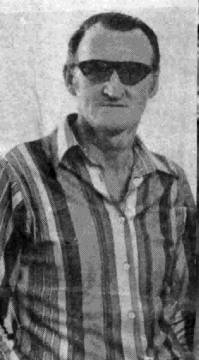 Rovira
Raul Ochoa "Rovira" was a South American matador, best known for his quick kills. He later retired to become a manager and introduced his son, Jesus, to the bullring.