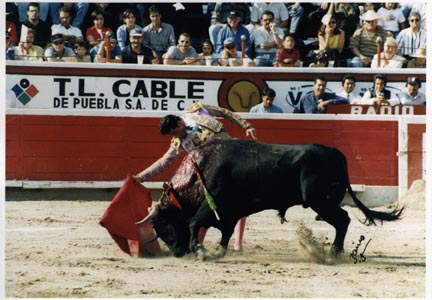 Jeronimo Aguilar
Jeronimo Aguilar, or simply "Jeronimo" as he is billed on many cards, is the grandson of the late Jorge Aguilar "El Ranchero" and in the 2000s has become regarded as one of Mexico's best matadors. 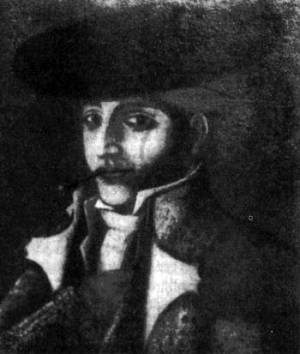 Tragabuches
Jose Ulloa "Tragabuches" was a matador from the 18th century who fought bulls by day and lived the life of a bandit by night. He disappeared from view after most of his gang, "The Seven Boys From Ejica," were wiped out, but his legacy remains, making him somewhat of a Zorro or Robin Hood of the bullfight world. 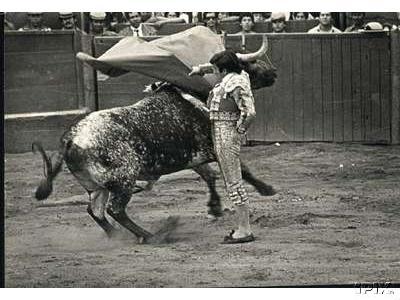 Nino De La Capea
Nino De La Capea was one of the dominant forces in bullfighting from the mid-1970s through the mid-1980s, eventually retiring to breed bulls. He was known for a cold, classic style. 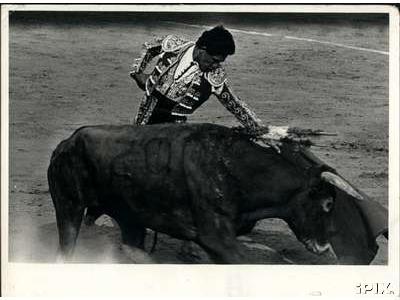 El Sargento
Fairly obscure South American bullfighter El Sargento died an uncanny death. A bull stepped on his hand when he was tossed but otherwise ungored. The lacerations from the hoof marks got infected, and he died from blood poisoning.

Alfredo Acosta
A popular Mexican novillero in the 1970s, Acosta recognized his strength was in placing the sticks and decided to become a banderillero. He acheived greatness in this role, which spanned three decades. 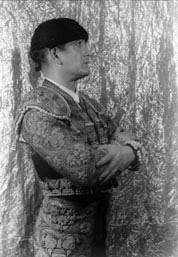 Sidney Franklin
Being Jewish, American, and supposedly gay, it is a miracle Sidney Franklin gained any ground at all in Spain or Mexico, but for a time, he was well established and capable. Sadly, he stayed in the ring way past his prime in order to push a protege, Baron Clements, and one of his last showings in Tijuana was a disaster. He died of a stroke in the ealry 1970s. He may also be seen in the film, The Kid From Spain with Eddie Cantor. 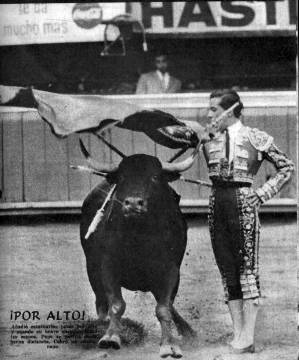 Pepe Caceres
South American matador Pepe Caceres spent several years in front of the horns and continued to perform when he was in his 50s, dying from a goring in the chest in Sogomosso, Colombia in the 1980s. 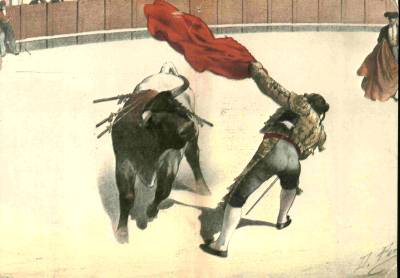 Bernardo Gavino
A Spanish matador who moved to Mexico where he spent most of his career, Gavino was brave to the point of being suicidal, but crude and often injured in the ring. He continued to perform when in his 70s and died from an infection caused by a goring to his leg. El Tato
El Tato was a matador who lost a leg due to a goring and was forced to retire. The strangest part was, the bones from this amputated leg were actually kept on display at a museum in Madrid until public protests forced their removal. 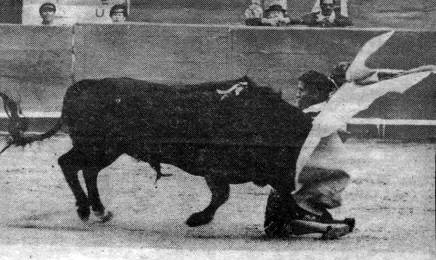 Raul Capetillo
Mexican novillero Raul Capetillo was known for hair-raising courage in the early 1970s but never graduated to stardom and ultimately left the bullring. 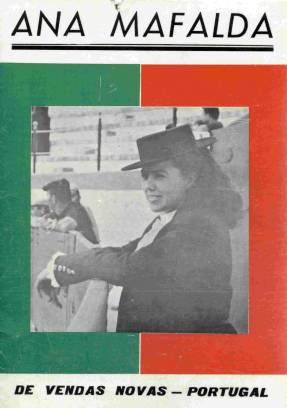 Ana Mafalda
Ana Malfalda was a woman bullfighter from Portugal who faced bulls from horseback with moderate success in the late 1980s. 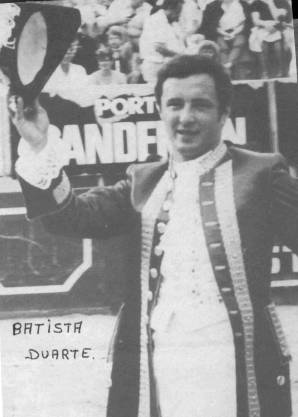 Batista Duarte
Batista Duarte remains a longstanding figure in Portuguese bullfighting, performing off of horseback as a rejoneador. While he has appeared around the world, his best showings have been in his native land. 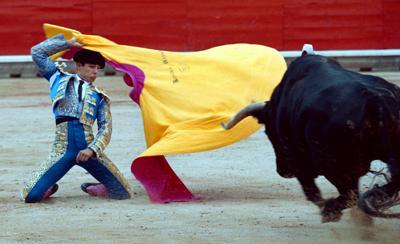 Rivera Ordonez
Coming from two famous bullfighting bloodlines, Rivera Ordonez has become a star of the Spanish bullrings in recent years, as well as an occasional promoter of bullfights. He has a valient and colorful style, showing skill in all phases of the bullring. 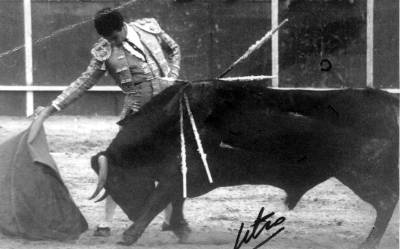 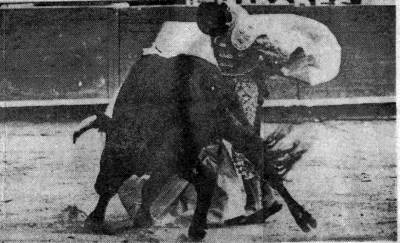 Pepe Benavides
Coming from Venezuela, Pepe Benavides was best known in the South American plazas for his work with the banderillas and the big cape. He came to Mexico in the 1970s to further his career and in spite of a competent showing in Plaza Mexico, never made much of a splash in the land of the Aztecs. 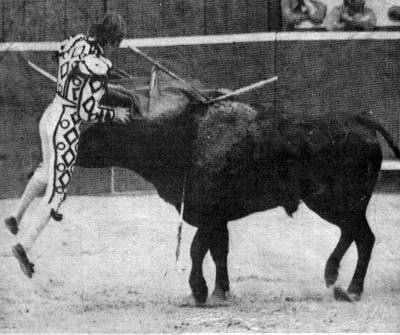 Curro Vazquez
Seen here being gored in Tijuana in the early 1970s at the start of his career and an early mexican campaign, Curro Vazquez would go on to become an integral part of Spanish bullfighting as he grew older, becoming a respected star in the profession. 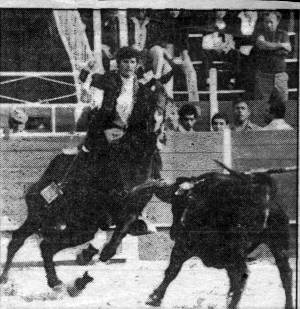 Jose Varela Crujo
Crujo was a modest rejoneador in Portugal who was knocked into a coma when tossed from his horse. In 1987, after three long years on life support, he was finally released from the machinary and allowed to die. 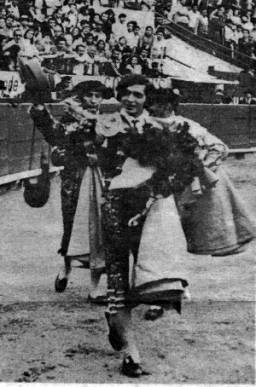 El Inspirado
Miguel Munguia "El Inspirado" showed great promise as a novillero but took the alternativa prematurally and all but destroyed his career as a matador de toros. He died in 1998, resting on the glories of his early triumphs in Mexico City and other large bullrings, which he never was able to duplicate later on. 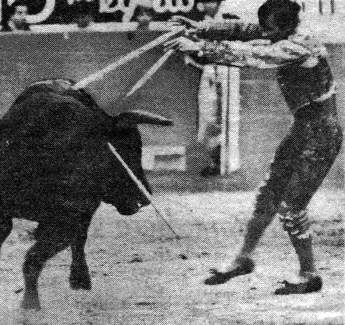 Miguel Zepeda "El Breco"
El Breco was a modest matador active in the 1970s, who like many others, had a career hampered by bad gorings. 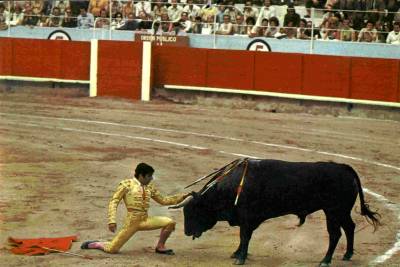 Damaso Gonzalez
Spanish matador Damaso Gonzalez was known for extreme bravery and remained a top matador in the 1970s with especially noteworthy showings in Madrid, Sevilla, and other important bullrings.