Napoleon
Jose Ruiz "Napoleon," the brother of matador Fabian Ruiz, left the bullring to retire to his native Aguascalientes and place emphasis on becoming a singer. While his older brother, Fabian, was a highly regarded matador, Napoleon was and still is better known for his musical talents. 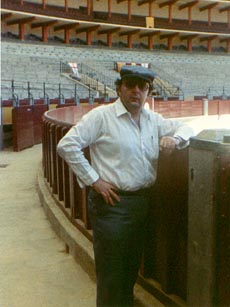 Dale Pierce
Seen here with his ever-present Spanish cap, American writer Dale Pierce stares emotionlessly into the camera before a bullfight in Zaragoza, Spain. Aside from writing for numerous newspapers and magazines over the years, he is the author of several books with bullfighting content. Bullring and Play Me the Song of Death were horror novels with a bullfighting twist, while Wild West Characters, a book on wild west personalities, also included bullfighting personalities from the 1900s. He is one of the main contributors to this site, and after a lengthy absence from the bulls in the 1990s, is back in action, writing once more. 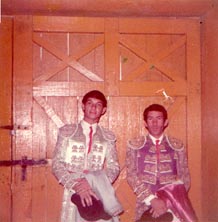 Raul Ponce De Leon
Seen here (left) in a 1972 bullfight in Nogales, Mexico, along with El Queretano, Raul Ponce De Leon strikes an imposing figure. During the 1970s, he showed great promise, doing will in Juarez, Tijuana, and even Mexico City. For some reason, his career stagnated rather than reaching glorious heights, and he became a capable journeyman torero, but not a top star. A few years back, he appeared in a festival. Bald-headed and much older, he still managed to surprise the fans with his physical conditioning, as well as his bravery. Some of the spectatrs marvelled that as a professional, he did not go further than he did. 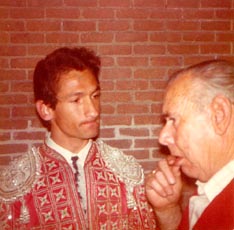 Carlos Escobar "Frascuelo"
An ageless veteran of the bullring, Frascuelo, who took his nickname from the 19th century star matador, is seen here talking to a Madrid fan in a Julky, 1975 corrida. In this bullfight, he provoked the attention of the fans and critics when he had to act as lone matador, after fellow toreros Curro Fuentes and Antonio Rojas were injured. He was carried from the ring on the shoulders of the crowd in complete triumph. Though his career continued for over 25 years after that victory, he was never fully able to surpass this legendary afternoon. Eloy Cavazos
At 5'3", Cavazos was a diminutive superstar of the Mexican bullring from the 1960s through the 1990s. (He became legendary for retiring and making comebacks.) The "Little Magician from Monterrey" or the "Little Giant," as he was called by fans, was especially known for his work with the sword. 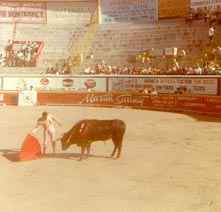 Joel Tellez "El Silverio"
This matador from Monterrey, Mexico took his nickname due to an uncanny resemblance to another Mexican bullfighter named Silverio Perez. While this particular Silverio never duplicated the success Perez had in the bullring, he was a brave and dominating matador, who turned in several good showings in both Spain and Mexico. The Mexican border served as the scene of some of his biggest triumphs, notably Juarez, Tijuana, and Nogales. 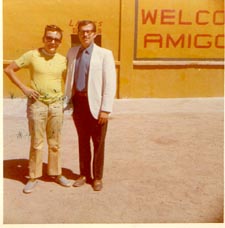 Mario De La Fuente Jr.
Mario De La Fuenete Jr. (right) was part of the large family of De La Fuentes active in bringing bullfighting to the town of Nogales, Mexico on the Arizona border. The biggest coup for the family was when they were able to sign legendary El Cordobes for two consecutive bullfights in their 5,800 seat ring in 1969. Mario has been instrumental in the building of a new bullring in Nogales, inaugurated in 1999. 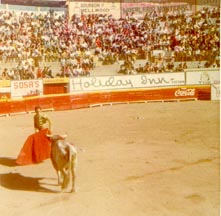 Caleserito
Alfonso Ramirez "Caleserito," the first of several sons of Mexican matador Alfonso Ramirez "Calesero," entered the bullring amid much hype in the late 1960s. Though he had great afternoons in Mexico City, Nogales, and Juarez, he was never ever able to escape his more famous father's shadow. He eventually retired to become a businessman. Julian Maestro
As part of the "Child Bullfighter" team with Lucio Sandin and El Yiyo from Madrid, Julian Maestro showed much promise as a novillero, raising high hopes among the fans. After Sandin lost an eye, Yiyo was killed, and Maestro himself had an unlucky day in Madrid, he dramatically announced his retirement as a matador, becoming a banderillero instead. During the 2000s he renounced this decision and returned to the bullring as a novillero once again, finally taking the alternativa in 2002. 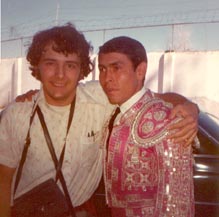 Mariano Ramos (right)
For several seasons during the 1970s and 1980s, Mariano Ramos dominated the bullfighting scene, with great triumphs in Tijuana, Juarez, Mexicali, Mexico city, San Luis Potosi and other major rings. He also made a great debut in Spain and was well received in Madrid. Smooth and artistic, he was a top matador in his day. 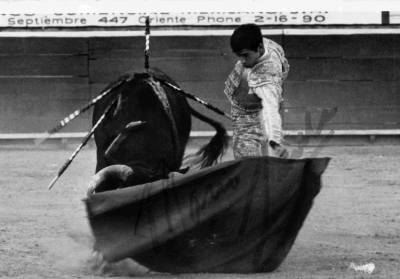 Mario Sevilla
During the early 1970s, this matador looked to be a rising star, but a number of very bad gorings took their toll on him. He remained a capable journeyman, especially popular in Tijuana, Nogales and Juarez. 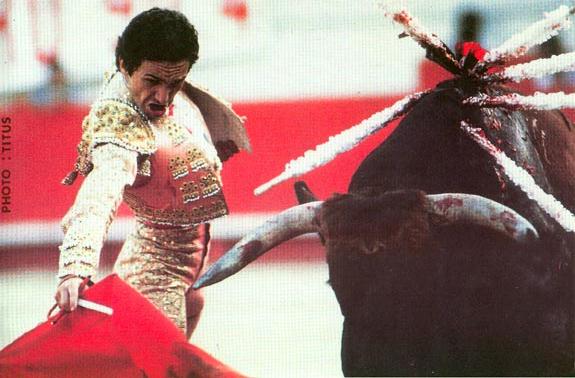 Richard Milian
Unquestionably one of the greatest French bullfighters ever, Richard Milian shows style and form in this photo. Note the proximity of the horntip to the matador and his leg. Soares
Armando Soares of Portugal was a complete and flashy matador. Aside from numerous triumphs in Portugal in the 1960s-1970s, he made a successful Mexican tour, with especially triumphant afternoons in Nogales. During his last few years of activity, he appeared in bloodless bullfights inthe United States. 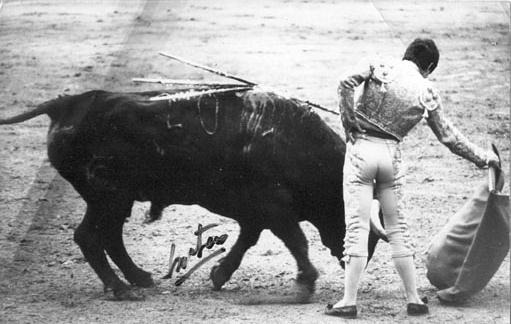 Espartaco
The daring star of the late 1980s, the subject of numerous songs in his honor and one of the most colorful matadores in his era, he is seen here, during a faena in Madrid. 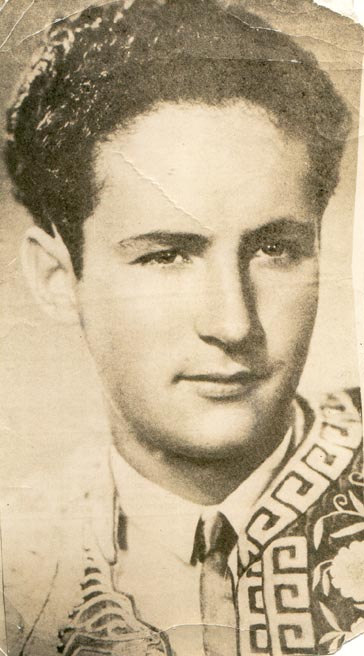 Felix Guzman
The ill-fated young torero who was killed following a goring to the leg in Mexico City. He might not have died, had he been hospitalized at once, but he insisted on killing the offending bull and limping around the ring to receive the applause of the crowd, not realizing the seriousness of his injury. Graceful with the two capes, fantastic with the banderillas, and a good swordsman, his death was considered a great loss. 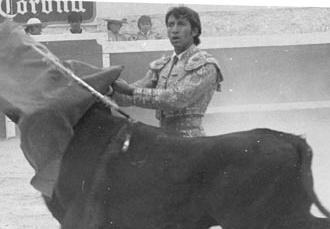 Julian Villela
This Chihuahua-born matador possessed a decent amount of courage but often lost awards due to failure with the sword. During the 1980s, he was popular along the Mexican border. Paco De La Fuente (far right)
Paco De La Fuente and his family were promoters of the Nogales bullring for many years, instrumental in bringing many famous toreros, such as El Cordobes, Luis Procuna, Paco Pallares, Curro Rivera, Antonio Lomelin, and others to this border town in the 1960s through the 1990s. He is seen here with matador El Queretano and banderillero Juan Manuel. 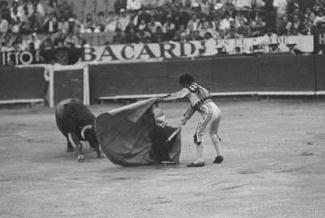 Jose Hernandez Rios "el Chato"
A popular banderillero from Tampico, Mexico, who spent decades plying his trade. In what was to be his final season in front of the bulls, he was killed from a goring in the neck in the Mexican interior. Luis Miguel Dominguin
The Spanish ace of aces, known for his rivalries with Manolete and Antonio Ordonez. He may also be seen in the bullfight scenes of Around the World in 80 Days with David Niven and Cantinflas. Artistic, dominating, and arrogant in the ring, he eventually retired and died from a stroke. His long-time rival and brother-in-law, Ordonez, would follow him in death two years later. 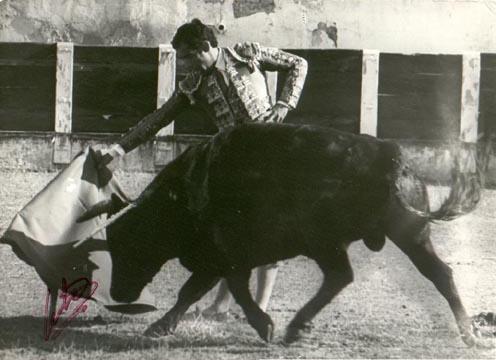 Manuel Capetillo
The Mexican matador and movie star demonstrates why he was known as "Mexico's major muletero" during the 1960s, when he appeared throughout Latin America and Spain. He is the father of contemporary toreros, Manuel & Guillermo Capetillo.