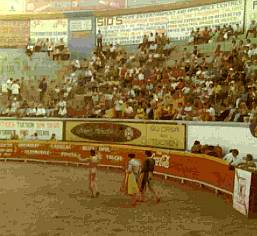 Alfonso Ramirez "Calesero"
He fought from the 1940s until 1966, when he officially retired, though he appeared in many festivals long after this and lived to see his sons become toreros. Calesero was known as "The Poet Of The Cape" due to his work with the big capote, which was his trademark. He died in Aguascalientes, Mexico in 2002. 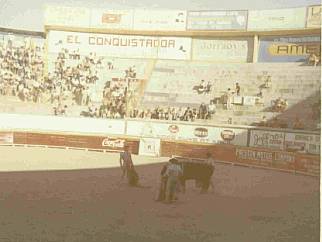 Luis Nino de Rivera
Luis Nino de Rivera drew acclaim as a novillero int he 1970s, but became more famous as a commentator and writer on bullfight themes, from Mexico City, which proved to be his true calling in life. 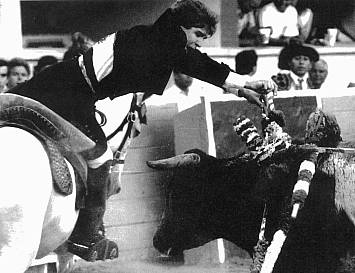 Rodrigo Santos
Rodrigo Santos remains one of the foremost rejoneadores in the bullfighting world today, right behind Pablo Hermoso De Mendoza and is seen many times each year in the bullrings of the world, especially Mexico, where he has great cartel. 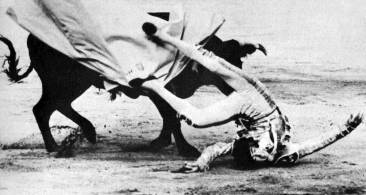 Juan Espejo
Spanish novillero Juan Espejo is best known for this incident in the late 1950s. After receiving this tremendous tossing and blow on the head, he left the bullring, climbed into the stands, asked if he was on "The bus to Aranjuez," and insisted the "driver leave at once." He then passed out and was taken to the infirmary. Little else is recorded of him in the arena. 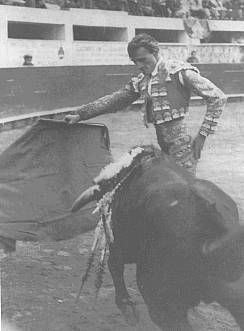 Rocky Moody
An American novillero, Rocky Moody lost a leg due to a major goring in Juarez in the late 1950s. He made an attempt to return to the bullring with an artifical leg and failed. He retired to Texas, where he died in 1991.

Pacorro
Jorge Espinosa "Pacorro," not to be confused with the Spanish matador Pacorro from the 1960s, was a promising Mexican novillero in the 1980s, especially good with the banderillas and capote. Unfortunately, he could never beat the political system. Most of his performances were designated to capeas and small placitas, which is a pity as he will be remembered only by the few people who saw him in action and not the multitudes of fans he should have won. 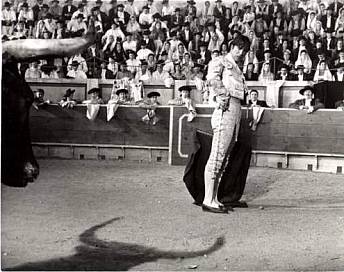 Rafael Carbonell
Rafael Carbonell from Huelva, Spain was a rising novillero in the 1950s, who was building up a great fan following when his life was cut short. He died from a goring in the leg, which severed the femoral artery, while performing in front of his hometown crowd. He lived, died, and was buried in Huelva. 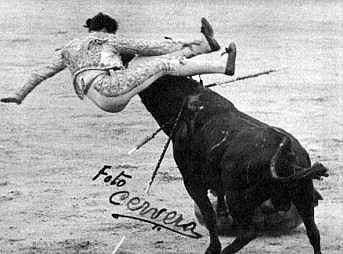 Paco Pita
Paco Pita is shown here while a novillero in the 1950s, taking one of the many gorings which forced this Spaniard to become a banderillero instead. In 1969, he was gored for the final time, fatally. His remains were buried at the Cemetario Carabanchel in Madrid, the same graveyard which holds the tomb of the famous Frascuelo. 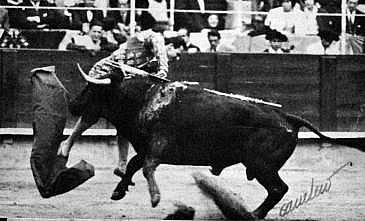 El Zorro
A rising novillero, El Zorro was killed in Barcelona in 1958 as this photo shows. A fatal horn wound in the intestines as he placed the sword brought his life and career to an untimely end. 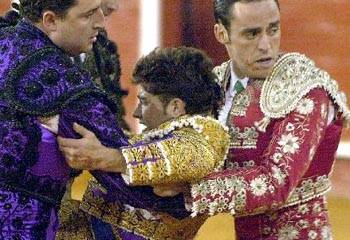 Fernando Robleno
Looking worse for wear after receiving a serious goring, Fernando Robleno came back from this wound and is presently a highly regarded matador recognized throughout the bullfighting world. 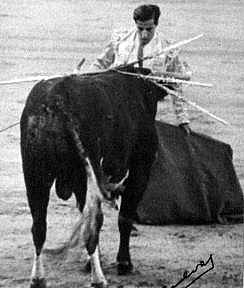 Manolo Vazquez
Manolo Vazquez, brother of celebrated Spanish torero Pepe Luis Vazquez, had a long career himself, from the 1950s into the early 1980s. He retired after a spectacular farewell performance in Sevilla, where he was carried out in triumph on the shoulders of the crowd. 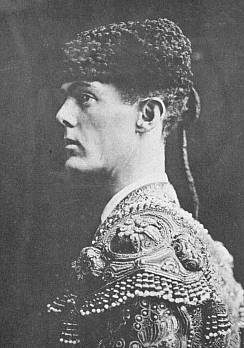 Harper Lee
Harper Lee, the first American matador de toros, was a brave, but badly gored bullfighter in the 1910s. His exploits have been written about in the books Knight in the Sun and Wild West Characters (see mercado/store and book review sections in this site.) Upon retiring from the ring, he raised chickens on a farm, until he died from oral cancer many years later. He is buried in San Antonio, Texas. 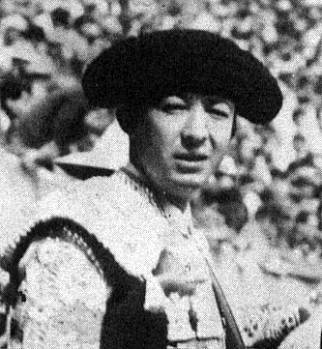 Luis Briones
Luis Briones, the older brother of Felix Briones, was a popular Mexican matador, though often badly gored. In Spain, he was gored in the face, and in Nogales, Mexico, he was gored through the lower back, yet survived both wounds. He retired from the ring and died of natural causes many years later. In action, he was known as a valiente, with a dashing but unartistic style. 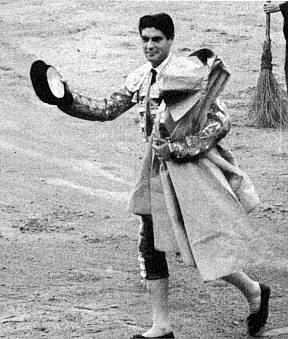 Jaime Ostos
During the 1960s, Jaime Ostos was a highly regarded matador known for his skill with the sword. Political controversies and many bad horn wounds spelled an end to his career. 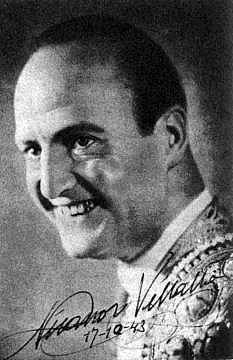 Nicanor Villalta
Tall and lanky, Nicanor Villalta resembled a "praying mantis" in the ring, according to Hemingway. He was, however, capable in all acts of the bullfight and scored many triumphs, cutting over a total of thrity ears in Madrid alone, one of the toughest bullrings to please the fans in, in the world. He lived to be quite old and died of natural causes. 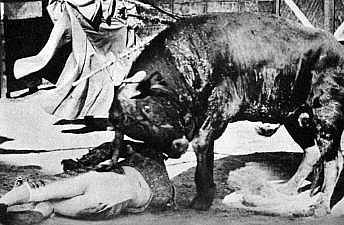 Angel Castejon
Angel Castejon was a rising young novillero, who met death in San Sebastian de Los Reyes, due to a massive goring while placing banderillas. His death was considered a major loss to the bullfighting world, as he seemed destined for greatness once he took the alternativa. He did not, as noted, live long enough to receive the ceremony. 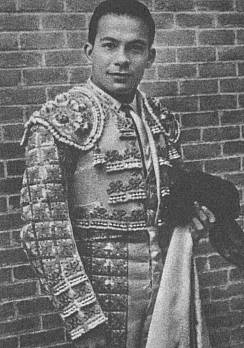 Canitas
Canitas was a brave but modest Mexican matador, known for his role alongside Fermin Rivera, in the film The Brave One. He fought well in Spain and Mexico, retired, then made an ill-advised comeback because he needed the money. In this return, he was gravely gored in Mexico City while working with the muleta and lost a leg due to the injury. He was forced to retire and died of a heart attack decades later. 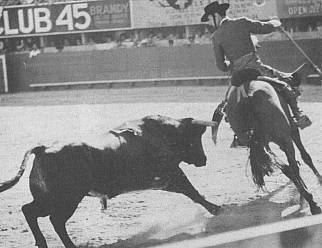 Eduardo Cuevas
Eduardo Cuevas arose on the scene and became an extremely popular rejoneador in Mexico in the 2000s. He is still going strong and gaining great cartel. 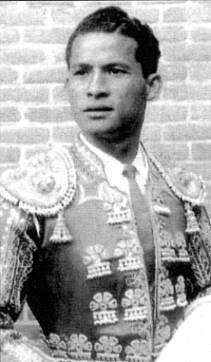 Curro Giron
Curro Giron, brother of Cesar Giron, appeared from the 1950s until the early 1980s when he made a triumphant retirement tour before returning to his native Venezuela. There, he died from complications during an intestinal operation. 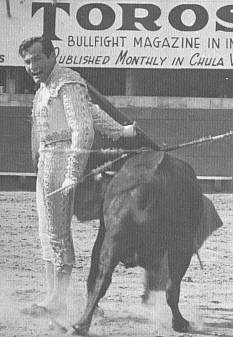 Guillermo Carvajal
Guillermo Carvajal was a popular Mexican matador in the 1950s and 1960s, plagued by numerous injuries and health problems. Nonetheless, he enjoyed tremendous fan support, especially in bordertowns such as Nogales and Tijuana.